Owens was signed by Exeter City in October 1953 from Pontypridd. He was signed on the same day as fellow Welshmen, Norman Packer and Tony Parker.

Both Owens, who was an upholsterer until signing for City, and Packer made the Grecians’ first team.

He made his debut against Brighton and Hove Albion in February 1954, and was retained by the Grecians to appear in a further nine league matches the following season.

He was sidelined through illness at the end of the 1955-56 season, and after being given a free transfer by Exeter, was wanted by Rochdale.

He was offered a two month trial by Bournemouth & Boscombe Athletic in June 1956.

However, Owens sustained a broken leg after just five seconds in a practice match, which ended his playing career.

He did attempt a comeback when joining Barrow on a one month trial in October 1957. 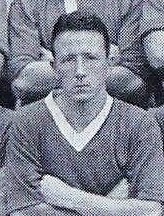 Still alive and living in Ynysybwl

I'm sad to say that John died about six weeks ago.  RIP John.