As we welcome Paul Tisdale back to the club for the first time since his departure last summer, today’s classic match remembers one of the most memorable moments during his 12-year tenure at St James Park.

In the years leading up to the 2009/10 season, there had been plenty of drama to be had on the last day of the season. In 2007 the club visited Wembley for the first time, and while that ended in a narrow defeat, we were back the following year to beat Cambridge United and return to the football league.

The following season then continued our incredible run, when Richard Logan’s header at the Don Valley Stadium earned the club a second successive promotion, and a place for the Grecians in League One.

While those previous seasons had seen us competing at the top of the table, 2009/10 had a different complexion, as City were one of four teams, along with Tranmere, Gillingham and Hartlepool, fighting to avoid relegation on the final day.

Having not won in the previous 6 matches, form was certainly not on our side, and when that was added to the fact that our final day opponents, Huddersfield Town, were one of five teams still in the running for promotion, everyone knew it would take a big performance to stay up.

Just to add to the tension around the ground, the match did not get off to the best of starts, when with just six minutes gone a mix up between player-of-the-year Matt Taylor and R let Gary Roberts in to fire home from just outside the area.

However, buoyed by the 8,000 plus crowd and the confidence in their obvious ability, the City team came back into the game as Taylor responded strongly to the earlier setback by hammering a header into the net from a Ryan Harley corner.

As the clock ticked on the game was in the balance, and at the 80-minute mark City were looking nervously at the trap door to League Two. Then the moment came, as Paul Jones long ball towards the Big Bank was nodded down and flicked on into the path of Harley, who unleashed a volley from the edge of the box to give the Grecians the precious lead that they needed.

While the climax to the previous two seasons had led to promotion, this was an equally memorable occasion, and when the final whistle went with the ball at Harley’s feet, the man of the moment booted the ball into the sky as the Park erupted in celebration at the club achieving their prized League One status for the second year in a row.

Man of the match: Ryan Harley 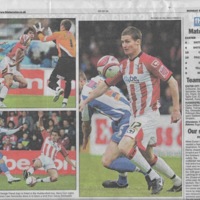 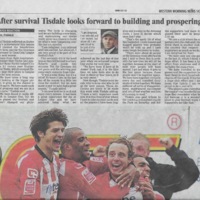 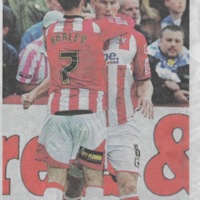 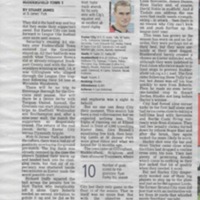 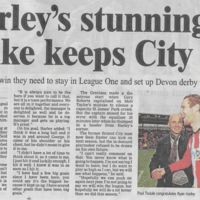 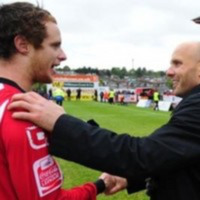 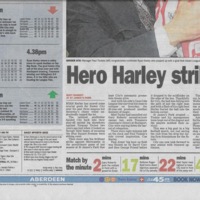 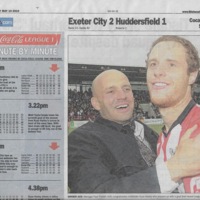 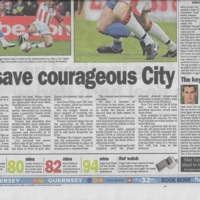