Signed by Exeter City on a free transfer in July 2010, after he had been released by Barnet at the end of the previous season, O’Flynn had also played on trial for Bristol City, but was not offered a contract by the Ashton Gate club.

Born in Cobh, near Cork, O’Flynn was with Peterborough United between 2000 and 2002, but he never made a league outing for them.

He then returned to the Republic of Ireland where he signed for Cork City until 2008, scoring an impressive 68 goals in 138 matches.

He was a member of the Cork City team that won the League of Ireland title in 2005, and also played in their successful Football Association of Ireland Cup winning team in 2007.

His impressive form saw him called up into the Republic of Ireland Under-21 team, where he played six times, scoring three goals.

O’Flynn tried his luck again in the Football League when signing for Barnet in 2008, and he again hit the goal trail with 29 in 70 appearances.

He turned down a £100,000 move to Shrewsbury Town in February 2010, and at the end of last season turned down down the offer of an improved offer from Barnet at the end of his contract, thus becoming a free agent.

Exeter City snapped up striker John O'Flynn from Barnet in July 2010 after he had been on trial at Steve Coppell's Bristol City.

The start to his City career went well and O'Flynn enjoyed a solid first season as the Grecians just missed out on the League One Play Offs. He made 32 starts and scored six goals.

Injuries hampered his 2011/12 campaign and restricted him to just two goals.

On 1 July 2015 O'Flynn signed for Cork City. He made 28 appearances scoring 3 goals and was released at the end of the season joining Limerick. He scored 13 goals in 30 games for Limerick.

In January 2018 he joined Finn Harps. 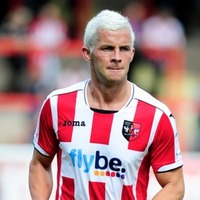 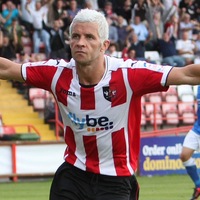 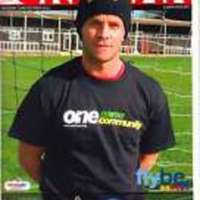 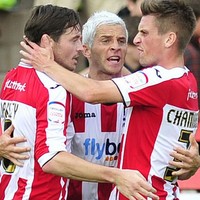