O’Brien signed on a free transfer from Bradford City in January 2012, with Exeter City taking over the contract that he had with the Yorkshire club. O’Brien, who made 131 appearances for Bradford City and scored two goals, was born in Halifax. His brother, a rugby league player, appeared for the Bradford Bulls. The defender joined Bradford City’s Centre Of Excellence when he was eight-years-old, and signed professional terms at the age of 18. He made his debut for Bradford City as a second half substitute against Doncaster Rovers in September 2007 in the Football League Trophy.

Such was his form in the 2008--09 season that he won the PFA Fans' League Two player of the month in December. O'Brien appeared in 49 of the club's 2009-10 season, starting 45 matches and coming off the bench 4 times. In June 2010, he signed a new two-year deal, the deal which also included the option for the football club to extend his contract into a third year if they had so wish. In the 2011-12 season he had not started for the Bantams since the 3-2 home defeat to Rotherham in November, and was clearly not in the Yorkshire club’s plans.

On 22 September 2012, O'Brien made his league debut against his former club Bradford City losing 2-0 at the Kassam Stadium, he played 62 minutes, his first competitive game since 10 March. 23 January 2013, O'Brien extended his deal to the end of the 2012–13 season.

On 7 June 2013, O'Brien signed a 1-year deal with Gateshead. He made his debut on 10 August against Kidderminster Harriers.

In August 2014, O'Brien signed for Northern Counties East League Premier Division side Thackley. O'Brien made his debut on 9 August in a 3-1 win against Barton Town Old Boys.

On 15 September 2014 he signed for Bradford Park Avenue on non-contract terms.

Just over 2 months later in November Luke signed for one of his previous clubs Thackley F.C. 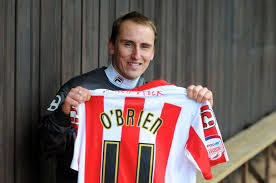