Ralph Nevin came from a well known footballing family, as he and each of his five brothers all played the game at a professional level at some time or another in the early Twentieth Century.

As a schoolboy he played as a centre-forward and centre-half, appearing for Lintz Rovers when they won the Stanley and District League four years in succession.

When the team broke up, Nevin went to Lintz Institute and was captain of the team for two years. He then joined Gateshead as a professional, but continued his employment as coal miner.

Nevin signed for Exeter City in the summer of 1912 and played his first game in a 2-0 defeat at Merthyr Town in September 1912. He only made a further six outings before being released.

The footballing legacy of the family continued after Nevin retired, with his son, George, playing for clubs such as Newcastle United, Sheffield Wednesday, and Manchester United.

Upon retiring from the game, Ralph worked as a coal hewer.

Sadly in September 1939, aged 51, he was killed by a fall of stone in the mine where he worked. 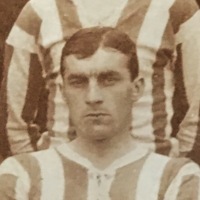 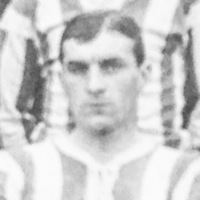 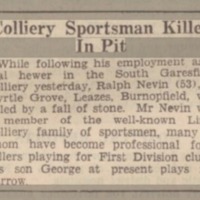 Results of my research using 'find My past':

However; record of baptism shows dob 6/6/1888 and baptised 15/7/1888 at Burnopfield, Co Durham. (Just north of Tanfield and close to Beamish museum)

1911 census of father shows there were 6 children in total and all still living at that time.

Newspaper article shows he was killed working in a coal mine in 1939.

The 1939 register which was taken later that month shows his widow Annie living at 16 Myrtle Grove Burnopfield. With her are probably daughter Doris Ellen Swinbank, sons Henry, Alexander and George.