Exeter City's four game drought was finally broken by an apprentice playing his first League match. Mark Robson, 17 year old Londoner was the scorer, and he made Exeter's second. He tormented Lincoln's shaky defence into so many errors that the winning margin should have been even greater. Young Robson made his mark in the first minute when a great pass put Dean Roberts through, but he slipped as he shaped to shoot. The first goal came after Roberts flicked on a free kick that Hodson and Strodder should have cleared, Robson was in like a flash to hammer the ball home from five yards. Robson's amazing run after 54 minutes split the defence for Tony Kellow to unleash a shot, it rebounded off Mitchell and Roberts steered it home. Simmons was sent off for walking all over City's Sean Priddle.

Mark Robson sparked Exeter City to their first win in seven games on a fairy tale Fourth Division debut at home to Lincoln City on Saturday. It was Boys Own stuff for the 17 year old apprentice as he scored City's first goal and set up the second for Dean Roberts. The slender young winger lifted the whole team and the crowd with his impish skills, superb touch and vision, and precious killer instinct.

Robson didn't have any idea that he might be playing for the first team when he turned up ready for a reserve match at the training ground on Saturday morning. Manager Colin Appleton called him into his office to break the good news-but even then the little Londoner was expecting to be substitute at best. It wasn't until within an hour of the kick off that he found out he would be starting against Lincoln. Robson has an awful lot going for him and his progress is also a great boost to City's hard working Youth Development Officer Mike Radford and his supporters, and is one in the eye for those who suggest the club's youth policy is a waste of time and money. 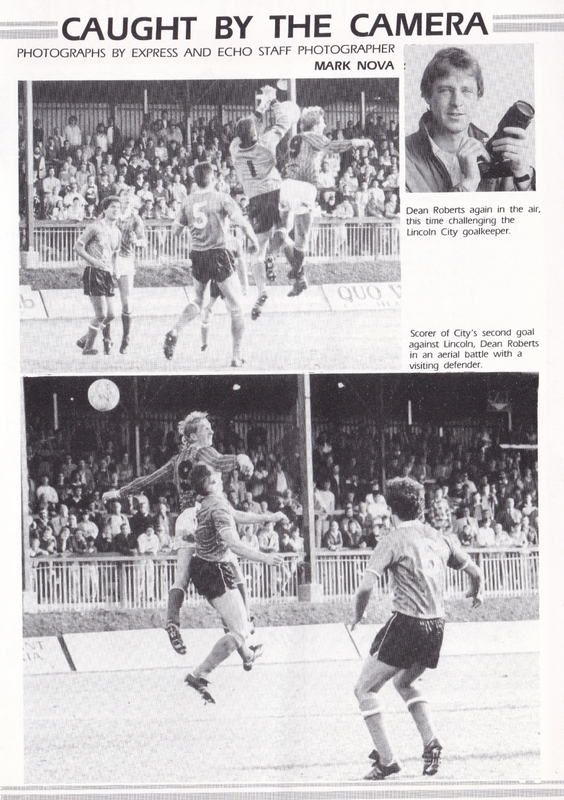