Looking back, it seems unbelievable. Just how did it happen? Was it luck? Or was he really a tactical genius misunderstood by all of us? I am rambling on about the City team of 1986/87, and how under the leadership of the sharp dressed man Colin Appleton, they undertook a run of thirteen league games without defeat at the beginning of the season. Admittedly, as always, away victories were rare, with all six games on our travels being drawn, but our home form was something else. Five wins, two draws, thirteen goals scored, none conceded. The thirteenth game has already been featured at length in the E.D, Issue 17 recalled the splendid 3-0 victory against Burnley, (with City playing the best football I had seen them produce since my debut in 1983) which pushed us up to third place and left us in good heart with a trip the following week to the Clarets' Lancashire neighbours, Preston. My Y.T.S allowance had already taken me to the delights of Newport, Cambridge, Wrexham and Hereford that season, but Preston at the time was my furthest trip afield watching the Grecians. Therefore I had to be particularly careful how I spent my £28.50 that week!

Preston, like City, had finished in the bottom four the previous season but were doing a whole lot better in the new campaign. They were in sixth position, just two points behind us, and had a game in hand. It looked likely to be City's biggest test so far that season, but with Rochdale the only lowly placed club the Grecians had visited in their opening matches, our confidence was high. Overall, City's away support was not too bad in 1986/87, and we had taken 400 to Hereford two weeks previously, but our paltry gathering of seventy in the away end at Deepdale was a trifle embarrassing. True to form though, those who made the effort did a good job in getting behind their side, despite being heavily outnumbered by the impressive home choir and seeing their side under the cosh for most of the first half.

It was all Preston in the first few minutes as they won a succession of corners. City weathered the storm and just as they were beginning to hold their own, North End struck. Andrew Watson's slight frame did not suggest he could foul anyone effectively, but he somehow managed to bring down Steve Taylor. Andy McAteer took the resulting free kick from just outside the area and it flew past the flying bald eagle in the City goal. This was the start of a sad few minutes for one of my friends in the stand, who by hanging his flag over the balcony and letting it flap above the standing Preston fans below, had issued an open invitation for it to be nicked! Shortly after the goal the inevitable happened and no amount of threats and cursing could retrieve his flag. The same person, ten minutes into the second half, decided to wander off for a pasty, and his luck was out again. Whilst he was purchasing his culinary delight, Keith Viney chose to whack a thirty yarder that screamed into the net, after Nick Marker's free kick had been cleared. Luckily, when Steve Pugh cracked another long ranged effort just wide a few minutes later, he had returned to his seat was able to watch in awe (and amazement). City killed the game off at that point, and with the likes of Viney, McCaffery and Watson at the back it does not say much for the Preston strike force. There was some excitement for the home supporters when the tannoy man announced the attendance, their best of the season to date, which was followed by a ridiculously loud cheer and a predictable burst of 'What's It Like To See A Crowd ?'. Their reaction to this announcement was slightly more orgasmic than to the last minute drama that was to ensue. Andy McAteer broke free on the right wing, and his cross was met by the head of Oshor Williams on the far post. I was aghast, and had learned that to watch City away from home, a policy of looking on the bright side was essential! It was a testing moment for my resolve, and I failed dismally.


Preston North End gave Exeter City, the Leagues only unbeaten side, a few early headaches on Deepdale's artificial turf this afternoon. North End forced two corners in as many minutes before Ronnie Hildersley blasted the ball over the bar when goalkeeper John Shaw failed to grasp the ball. Then Sam

Allardyce was unlucky when his powerful drive smacked the crossbar. On 29 minutes North End seized their opportunity when Steve Taylor was fouled by Andrew Watson. Hildersley stroked the ball in for Andy McAteer to slam it home. In the 55th minute Exeter's Keith Viney hit in a terrific snap shot from the edge of the box leaving goalkeeper David Brown hopeless for the equaliser. In the dying seconds former Exeter player Osher Williams netted the winner for Preston to dent the visitors unbeaten record. 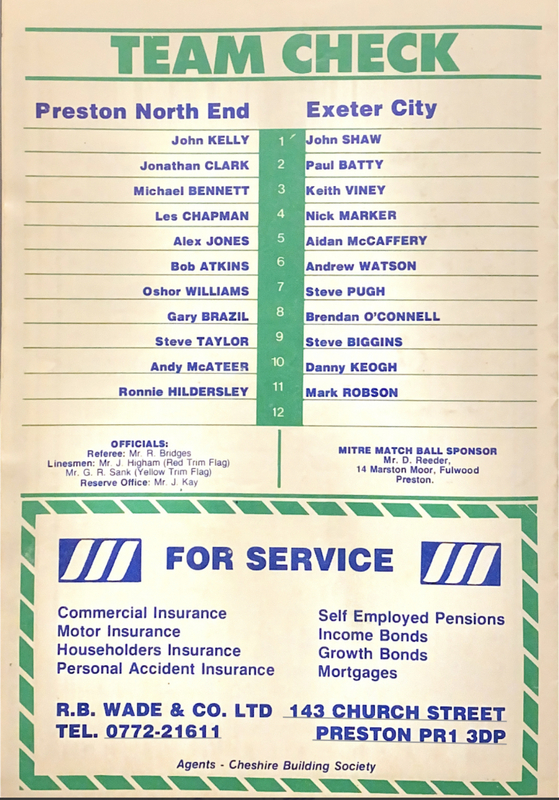