Exeter City Manager Colin Appleton is confident that City can bounce back to winning ways after losing their unbeaten League record on Saturday. As well as the 13 who travelled to Preston he has brought in Sean Priddle, Dean Roberts and Richard Massey for tonight's trip to Halifax. After losing 1-0 at Torquay, Halifax have put together a four match unbeaten run, but draws against Tranmere, Crewe and Cardiff, and an away win at Wolves have been overshadowed by the news of their massive debts. The club owes £350,000 and a meeting of shareholders and creditors is being held tomorrow week


Promotion chasing Exeter found out last night that lowly Halifax Town were not willing to lie down and die. Faced with massive debts and possible closure next week, Halifax refused to play like condemned men in what could be their last home match. But it took a gift goal from keeper John Shaw to set Halifax up for victory. He completely misjudged a corner by Ricky Holden in the 15th minute and Neil Mathews gratefully accepted the gift to head into an empty net.

Exeter's five man defensive system found Halifax a tough nut to crack but it could have been so different for them had Dean Roberts not wasted a magnificent opportunity in the first minute. Both teams contributed to a fast flowing first half, but Exeter were unlucky when Steve Biggins broke through in the 41st minute only to have his shot blocked.

As the game wore on Exeter abandoned their defensive intentions and swept forward looking for a point. The powerful running of Dean Roberts had the home defence worried, and Manager Colin Appleton threw on substitute and top scorer Brendon O'Connell with 25 minutes to go in an attempt to force a result. But his only chance came from a low shot which Phil Whitehead did well to save. With two minutes left Halifax gained the vital three points when Alan Knill powered forward and placed a perfect downward header into the corner of the net giving Shaw no chance. 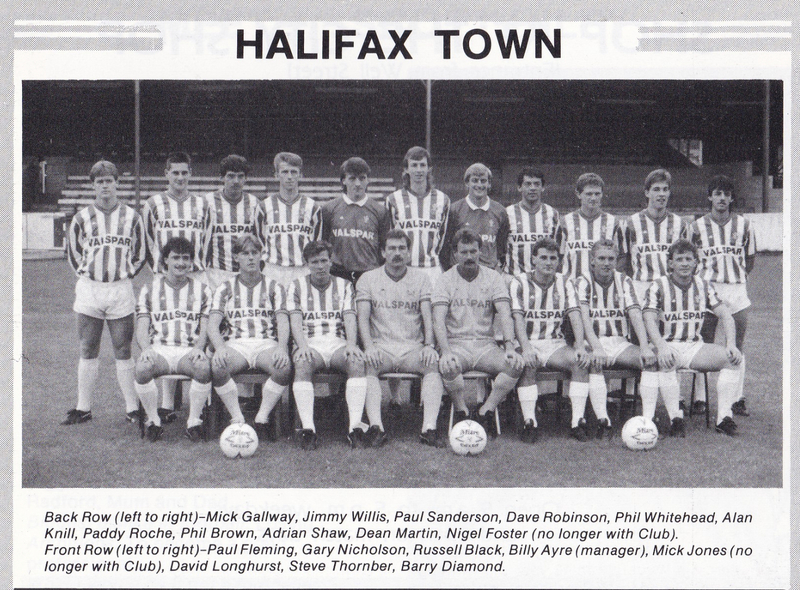