LEADERS GET ALL THE LUCK

There's not much justice in football, thats for sure. Proof positive came at St. James' Park on Saturday when battling Exeter City gave Fourth Division promotion certainties Northampton Town quite a scare before finally having to settle for a draw. Steve Biggins scored his first goal at home for City to give them a 38th minute lead and they looked capable of holding on for a famous victory until Richard Hill hit his 26th and luckiest goal of the season in the 59th minute with a shot that deflected in off Shaun Taylor. City still created enough chances to win an entertaining game in a rousing last half hour but had to be content with becoming only the fifth team this season to prevent Northampton from winning a League game. And their reward for such a magnificent effort at the end of a gruelling schedule of four games in nine days a one place drop down the League table!

Taylor made his home debut, and an impressive one it was too, alongside Aidan McCaffery, and Nick Marker continued in midfield, trying to keep a tight rein on free scoring Hill. Paul Batty restored to the engine room had an outstanding match. Exeter pushed forward at every opportunity with Batty in particular, and Mark Robson, when he got the service, always looking to run down the flanks. The rare sight of two teams going all out for victory made it an exciting and intriguing encounter which the appreciative crowd rose to. 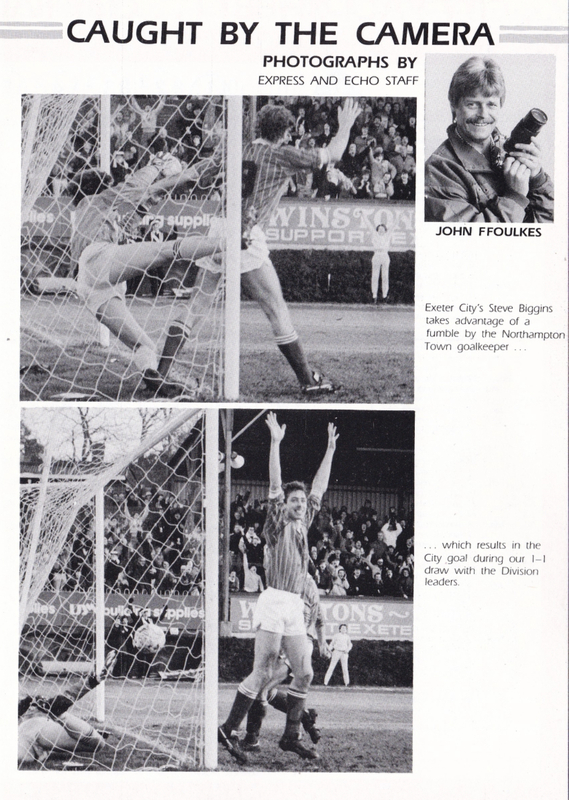