Exeter City preserved their unbeaten record last night with a dramatic goal a minute from the end from substitute Tony Kellow, who cleverly lobbed keeper Alec Chamberlain. It cancelled out Colchester's effort from Tony English 14 minutes earlier. All the action came in the last 15 minutes of a dreadfully dull, uninspiring, defensive battle of few shots and scant goalmouth thrills. Exeter stringing 5 players across the back, clearly had a point as their sole objective. Aidan McCaffery and Keith Viney were stalwarts in defence and City's tactics looked to have succeeded until Colchester took the lead. All looked lost for Exeter but with Kellow coming on for Brendan O'Connell, they at last threw extra men forward and the long serving striker was their hero with the dramatic last gasp equaliser.


CITY manager, Colin Appleton, at the end of the night, could fairly justify his statement that the means justified the end, writes a Special Correspondent. For while Exeter made few friends with an ultra defensive display the fact remains that they deserved their point. Apart from one minor hiccup their packed rearguard rarely looked like giving anything away and even when Colchester did sneak a goal Exeter deserved full marks for hitting back. It was the cool brain of the experienced Tony Kellow right at the death that maintained Exeter's record of being unbeaten at Layer Road for the third season in succession. It was a night of frustration for Colchester who have yet to recapture the splendid form which saw them end on a high note last season. In the very first minute Exeter, with a quick move, had the Colchester defence in some difficutly, Hedman having to concede a corner to keep out Gale. From Viney's flag kick the ball ran loose to Priddle who was unmarked and he should have done better than sky the abll over the bar. It was then the five-man visiting defence, aided and abetted by John Shaw, who had a brilliant game in goal, that survived a period of Colchester pressure. Just before half time Exeter, in a three-minute spell, had three chances. From the first Marker got on the end of a Pugh free kick which was headed wide. Then Marker with a quick turn sur- prised the Colchester defence but put his snap shot just wide. Then right on half time Chamberlain in the Colchester goal had to look very lively indeed to get down to a shot from Pugh.

Exeter, immediately after the interval, illustrated they were dangerous on the break. Gale got away on the right and with the Colches- ter goalkeeper out of his goal let fly only to see his shot rebound off the stanchion. Colchester took the lead when for once the Exeter defence failed to pick up a man on the far post. Phillips crossed the ball to the far side of the Exeter box and Tom English flicked it back across goal for his brother Tony to rifle into the net. Exeter brought on Kellow for O'Connell. Gale had a good chance to equalise but shot tamely at the Colchester keeper and Harrower came within a whisker of getting the final touch after Kellow put a swerving ball across the face of the Colchester goal. Exeter's grit and determination was rewarded a minute from the end after an untidy scramble near the home goal. Kellow kept his head and cleverly lobbed keeper Alec Chamberlain for the equaliser. 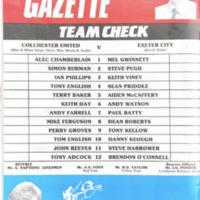 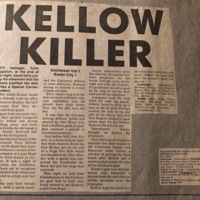