Tenacious Torquay deserved their share of the spoils in yesterdays closely contested Devon derby because of their fighting second half comeback-a feat that looked improbable at the interval when they were trailing by two goals.

Exeter played the more attractive football in heavy, muddy conditions in the first period, but for a long while could not find that vital touch. In many ways it was a typical local derby, no soccer classic in the conditions but always unpredictable, with plenty of lively action and a nail-biting finish in which the game could have gone either way. Exeter took the lead after 35 minutes. A clever overhead kick from Tony Kellow sent Dean Roberts away and he rounded keeper Kenny Allen before striking his shot firmly into the empty net. Three minutes later Roberts was put through on his own again. This time Allen blocked his shot and the ball went wide to Kellow, who calmly and accurately chipped a 20 yard shot into the net.

Even those goals did not knock the stuffing out of Torquay. In the 49th minute they pulled one back as Dave Cole got in a cross that skipper Keith Viney tried to clear. He got a touch but the ball went to Phil King and he saw his chance to chip a fine shot into the corner of the net. 20 minutes later Torquay were back on terms. Russell Musker tried a rocket-like drive that took a deflection and the ball fell into the path of substitute Mario Walsh who stabbed home the equaliser from close range.

The great St. James' Park showdown between Exeter City and Torquay United had all the ingredients of a derby duel, drama, excitment, passion and goals. Neither side earned too many marks for technical merit and artistic impression, but they certainly succeeded in serving up an incident packed exciting game. City came off the starting blocks like an Olympic sprinter. They were 2 goals up in precisely four minutes and eight seconds.

Warren Ward netted the first after 22 seconds, as he met a Jim McNichol cross from the right to turn it neatly past Fry. Steve Harrower made it two, latching on to an Alan Crawford pass that split the Torquay defence. The visitors were back on terms by the 33rd minute. Walsh beat the City offside trap to make it 2-1 in the 12th minute, then Torquay equalised when a West free kick rebounded off the Exeter defensive wall for Pyle to score from 15 yards.

From then on the game developed into a cut and thrust battle and a point a piece dead heat didn't do either club's re-election worries much good. For all the good intentions the game lost its direction in the second half and finally petered out in to a bit of a bore by the end. 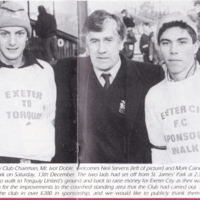 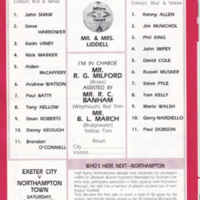