Exeter staged a marvellous fightback at Molineux to cancel out a two goal lead by once proud Wolves and keep alive their hopes of Division Three football next season. They made it 2-2 with a 76th minute goal after Andrew Watson had been given his marching orders. Exeter were a goal down after just 8 minutes when the menacing Steve Bull pounced to grab his 5th goal in 6 matches with a superb solo effort. Wolves increased their lead with a cracking shot from the enterprising Andy Thompson in the 17th minute. But 6 minutes later Exeter reduced the arrears with their first shot of the game after a defensive blunder. Chris Brindley in trying to clear nodded the ball straight to Mark Robson and he crashed home a low shot into the right hand corner. After the break Exeter looked the more positive and determined side. City levelled to earn a deserved point 60 seconds after the dismissal of Watson. A shot from Brendan O'Connell struck Wolves defender David Barnes on the back and it fell straight into the path of Kellow who gratefully accepted the chance.. 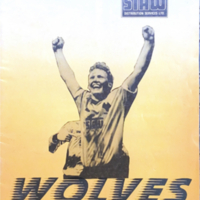 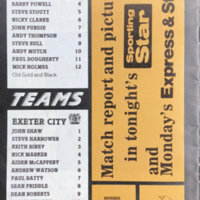