Exeter City not only lost their unbeaten home record, but their chance to go into the regional quarter finals of the Freight Rover Trophy with this slender margin defeat at the hands of Third Division Port Vale. In the second half, trailing by a goal which came a minute before the interval, Exeter threw everything they had into the battle to get back on terms. They came mighty close, gave Vale some anxious moments and forced the visitors into some hard, at times hectic, defensive work to keep Exeter at bay. But in the end, all that counted for nothing, for City's run of 16 unbeaten

home league and cup games was over. The damage, despite Exeter's brave attempts to equalise, was really done in the first half, because then it was that Port Vale were very much in the driving seat. Exeter were rarely in attacking action in that period, but things changed after the interval, with substitute Tony Kellow coming on to add his canny skills to City's attack.

With Exeter not creating many first half opportunities, Vale dominated and deserved to go in at half time a goal up. In the first 45 minutes they looked the more positive and direct combination. Paul Smith sparked off the all important goal after picking up a great pass from Ray Walker-Smith put in his cross, Andy Jones deliberately let the ball go past him and in slipped Paul Maguire to blast the ball in from close range. 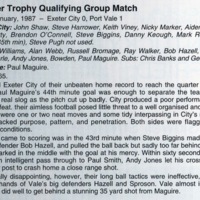 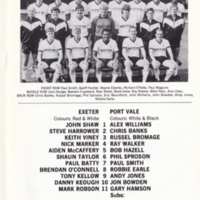