Under siege for most of the second half, Exeter hung on last night at Ninian Park to lengthen their series of drawn games this season to 18. Manager Colin Appleton whilst disappointed with the result was quick to emphasise that his team had not travelled to South Wales merely to share the points. In fact Exeter had an early chance to snatch a goal when skipper Keith Viney blasted a free-kick from 30 yards, and Mel Rees in the Welsh goal did well to tip the curling ball high over the bar.

Cardiff responded with a series of well constructed attacks which kept the visiting defence under pressure until Shaun Taylor used his height to relieve a tricky situation. Taylor also made his presence felt in attack and once was on hand only to be beaten by an acrobatic Rees. The strong running Dean Roberts went close in the 35th minute when he headed a Danny Keough free-kick fractionally wide. After a goalless first half Exeter displayed early commitment with Paul Batty testing the defence. But it was Cardiff who went closest to breaking their long spell of home league failures stretching back to December.

Paul Wheeler blasted well outside from a favourable position, an unwelcome feat he repeated later. It had by then become anything but a classic display, with too many ill-directed passes and too much kick and hope. However, Wheeler continued to show promise and when a long ball from Cardiff skipper Terry Boyle caught the Exeter defence off guard, the young Cardiff striker lobbed over the head of the advancing John Shaw, only to see the ball bounce wide. 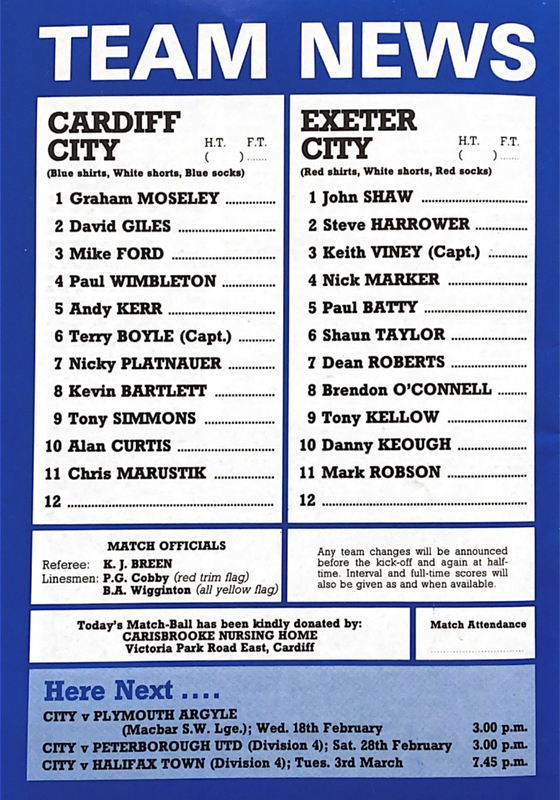