Exeter City must now roll up their sleeves and be prepared for a tooth and nail fight to stay in this seasons Fourth Division promotion race. There's no room for pussyfooting and pleasantries any more. The blood and guts battle for a play off place is on. That was firmly underlined last night when Preston North End robbed City of their season-long unbeaten home record in the League with a thoroughly professional performance capped by an injury time John Thomas winner.

Preston's approach wasn't particularly pretty to watch, especially as they put up the shutters after Gary Brazil's 11th minute penalty gave them the lead. But their Liverpool-style possession tactics were hugely effective. City had them reeling for half an hour after Tony Kellow's 56th minute equaliser from the spot, but Preston's experienced packed side rode the storm and their luck to emerge for that last gasp victory

Defeat, their first in 17 League games at St. James Park, keeps City out of the promotion frame in eighth spot while second placed Preston closed the gap on Northampton Town to 15 points by completing the double over Colin Appleton's team. "We've got to be more clinical, more determined. The last third of the season is going to be tougher than the first third. It will be a battle," warned the City boss.

Sadly, that last minute winner from Oshor Williams signalled a slump from City, and of their next ten league games, only two were won. An unbeaten run of six matches in January and February gave us hope that the promotion challenge could be resumed though, and an unlucky 2-1 defeat at third placed Southend was not enough to prevent me from registering confidence that when Preston came to town for the return fixture, their unbeaten run stretching back to November could be ended.

City boasted the only unblemished home record in the division while Preston had established themselves in second place, so once again the match was set up perfectly. However, while the game at Deepdale had been reasonable but not a classic, the encounter at the Park was to prove to be a real stormer. That it was such a good game is a tribute to City, as Preston had adopted a safety first attitude following their early goal.

The best chance before then had also fallen to the visitors, when Frank Worthington volleyed against the crossbar, and three minutes later his striking partner Gary Brazil was felled in the area by Keith Viney. He picked himself up to strike the spot kick home, so City found themselves in the strange position of being a goal behind at the Park. North End's possession football proved to be very effective, limiting City's efforts on goal to the very minimum in the first half, but the standard of football on offer from both sides was high.

The second forty-five minutes proved to be one of the best halves of football I have seen at the Park. Eleven minutes after the interval, Alec Jones pushed Tony Kellow in the area and again, the man fouled scored from the penalty. This was the signal for the singing in the Shed to reach a very impressive level indeed, after all there were no membership restrictions in those days, and the vocal effort certainly left the Cowshed of most of this season far behind.

It was also the signal for City to launch a furious attacking assault. Efforts from Paul Batty and Brendon O'Connell went close, while loan signing from York Martin Butler, despite some splendid approach work and dribbling skills, let himself down with some sloppy finishing. Steve Harrower was like a man possessed when he replaced Mark Robson with a quarter of an hour remaining, and his shot from a neat interchange shortly after his arrival looked a certain goal, before a Preston defender deflected it wide.

As the game went into injury time, I remember losing hope that City would gain a much deserved victory, but thinking that a repeat performance against a defence of lesser quality than Preston's would see Exeter canter to an easy win. Then, much to my amazement, Gary Swann ran down the left and crossed for John Thomas to sweep the ball in at the St James Road End. There was hardly time to kick off. It seemed so unjust at the time, how a side could dent your undefeated record in the last minute, and then dent your undefeated HOME record in the last minute, in the same season.

The Preston contingent, who had been vocally put in the shade by the enthusiastic crowd at the end of the Cowshed, went predictably mental, and so did the more undesirable elements of the City support after the final whistle. A large group surrounded the departing coaches as they drove alone Well Street, and a few objects (including a trolley) were hurled at one of them. Deciding that throwing coins, stones, trolleys or exorcet missiles at coaches would be a pathetic act on my part, I again wore that same sorry expression that had been prevalent for a couple of hours the previous November. And again the coveted 'Order of the Bright Side' was beyond me, this time the recovery period being one hour thirty-nine minutes twenty-six seconds.

Bearing this in mind, it is hardly surprising that we veterans of the Preston 86/7 campaign celebrated the four second half goals against North End earlier this month with just a little extra enthusiasm. 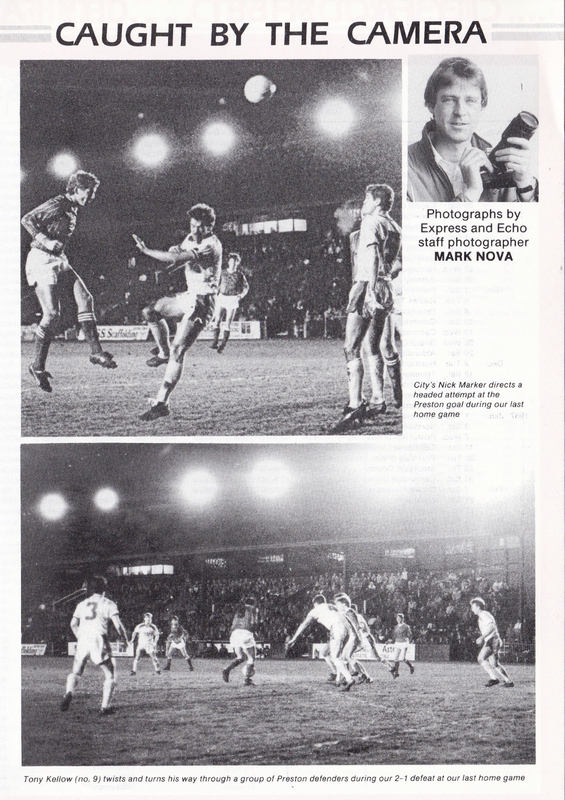