Exeter City failed to put the icing on their cake last night in a disappointing no score bore against Southend United at St. James' Park. The stage was all set for them to bounce back into the Fourth Division's top three with a good crowd urging them on. But Southend spoilt City's party and went away with the point they were looking for.

City have become the Division's draw specialists last night's was their sixth in eight League games and their third in a row without scoring. Their tidy defence restricted Southend to five half chances in the entire game, but having stifled the opposition so effectively City lacked the capacity to build on it. There was little crativity through midfield or down the flanks and plenty of effort but no end product in attack. City certainly had their chances to win but they just aren't ruthless enough in front of goal, and it's costing them a place among the pacesetters.

ROBSON GOES RURAL AND LOVES IT

England's Manager Bobby Robson officially opened Exeter City's "Cowshed" covered terracing last night thanks to the luck of club Chairman Ivor Doble who met the England boss in Mexico after winning a competition to go and see the World Cup. Robson told him if there was anything he could do for Exeter he would be pleased to help, and was as good as his word when the City Chairman wrote asking if he could come and re-open the "Cowshed" which had undergone £100,000 worth of improvements. Before the match Robson unveiled a brass plaque which will go up in the terracing area and said: "I think it is marvellous a club like Exeter should invest in the future in this way. It shows you have a great belief in the game and in the supporters." 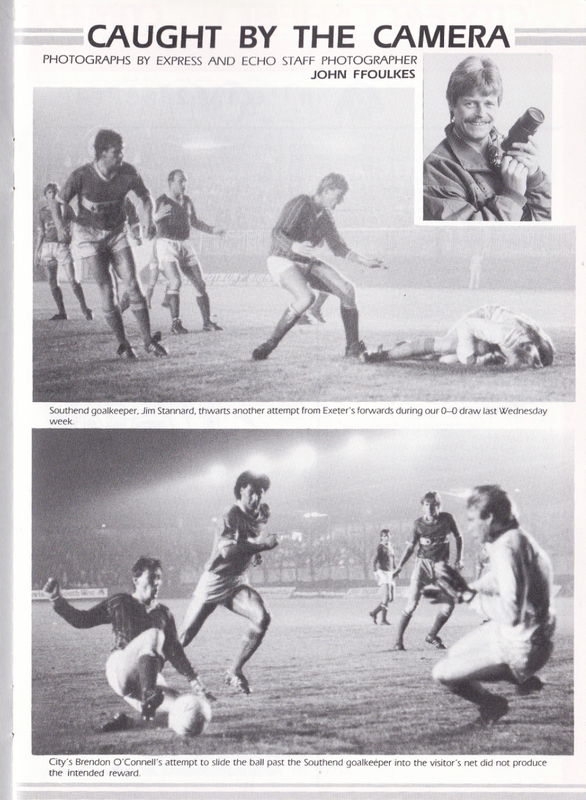