Exeter City's Fourth Division promotion hopes have all but vanished after last night's disappointing defeat against play-off rivals Orient at Brisbane Road. City stay in 10th place in the table but are losing ground on the other teams chasing a top six spot. And that's all down to their away form. They are now without a win on their travels for more than a year and have only three more trips left this season to remedy that unwanted record.

Manager Colin Appleton rang the changes in an attempt to improve City's record. Out went midfielder Gary Jackson, and striker Peter Foley. In came Richard Massey and Paul Williams, starting his first game since joining the club on a full contract a month ago.

After a lively opening with both sides looking to win and further their promotion hopes it was Orient who made the first breakthrough. With 11 minutes gone, a Godfrey chip was nodded into the path of Jones who finished in fine style from 18 yards. This early strike unsettled City and they were lucky not to go further behind when a cross from Comfort was headed towards goal by Cornwell, but luckily Nick Marker blocked the attempt.

City survived this Orient pressure and towards the end of the half Dean Edwards got around the back of the defence to fire in a low cross just held by keeper Wells. Minutes later, Paul Williams found himself clear in the Orient penalty area after a mad scramble but his shot was deflected inches wide of the post.

As the game went into the second half the result still hung in the balance. City looked dangerous on the break and Orient, with Godfrey and Comfort playing superbly, looked capable of scoring a second. Five minutes into the half Wells was forced into a brilliant save after a cross by Mark Robson was nearly turned into his own net by Orient defender Mark Smalley. Lifted by this, City stormed into attack and Edwards had a chance to equalise from the edge of the area but his shot was blocked.

John Shaw came to Exeter's rescue four minutes later when he miraculously turned a Cornwell header around the post. As the game swung from end to end Robson receiving a superb pass and after beating two defenders, saw his shot roll past Wells and the far post. Edwards had a diving header saved, but soon after Orient broke away and made it 2-0. Jones nodded back a Comfort cross into the path of Godfrey who scored easily. The stuffing was knocked out of City after that and apart from a five yard shot from Paul Olsson, well saved by Wells, City rarely looked like getting back into the game. 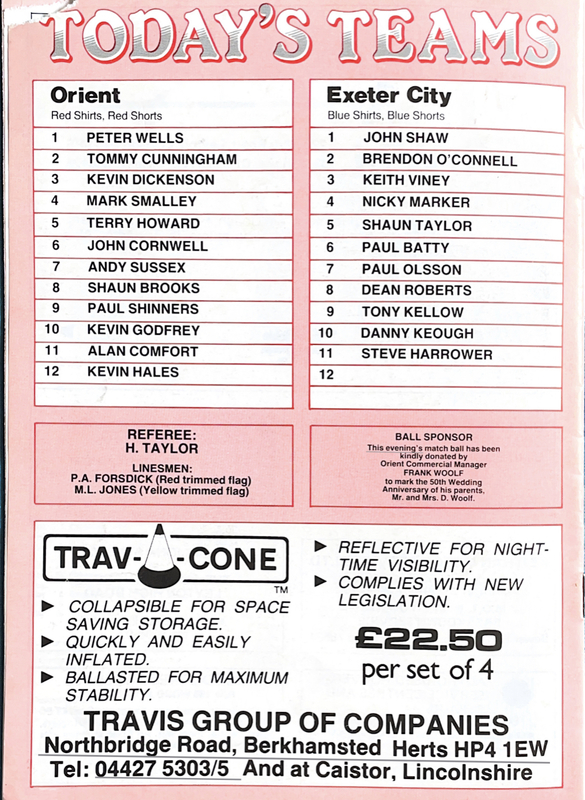