Draw specialists Cardiff City grafted for their point at St. James' Park. Their gutsy display seemed to be in vain when a penalty was awarded against them in injury time, but goalkeeper Moseley saved magnificently from Aidan McCaffery's shot to deny Exeter. Tony Kellow the veteran striker, was replaced by substitute Brendan O'Connell, who did not fare any better against a Terry Boyle inspired defence.

Two tough defences put the clamps on the match as a spectacle, although Cardiff came under the most pressure. Steve Harrower, Dean Roberts and Kellow were all well supplied in attack, but Cardiff keeper Moseley was rarely called into serious action. Exeter's best chance came when Roberts dispossessed Brignull and lobbed over the advancing Mosely, the ball thudded against the bar and bounced clear. Exeter danger man Roberts felt the full force of Boyle's fierce but fair challenges, and midway through the second half he was limping badly.

EXPRESS AND ECHO
Report by by Trina Lake

THE FIRST thing on Exeter City's agenda in training this morn- ing should have been penalty practice. For the second time in a month a City player missed from the spot on Saturday. Paul Batty's first blunder against Newport cost City a possible place in the second round of the Littlewoods Cup. Aidan McCaffery was the latest culprit against Cardiff City. His injury time miss robbed City of the full three-point haul they de- served for dominating their Welsh visitors so completely. To be fair to McCaffery, he did strike the ball on target but Cardiff goalkeeper Graham Moseley guessed right and stopped the shot just inside his right-hand post. McCaffery wasn't the only man guilty of missing gilt-edged chances and City must consider this a case of two points dropped rather than one gained. They set about Cardiff right from the first whistle with Danny Keough's probing passes from midfield and good early balls from defence putting the visitors under heavy pressure. Tony Kellow and Dean Roberts combined to give Cardiff's shaky central defensive pairing of Terry Boyle and the sluggish Phil Brignull a torrid time for the first hour. Then Brendon O'Connell replaced Kellow and wrecked even more havoc. Defensively City rarely looked troubled the organisation and effort of their back line has been a feature of this successful early- season run. Cardiff were denied the space to exploit the skills of men like Alan Curtis and Alan Rogers. They managed to carve out a few openings towards the end of the first half and got on top for about 10 minutes after the break. But City 'keeper John Shaw was forced to stop only two shots on target and dealt confidently with everything else. For all their control in the first half, City created few clear-cut chances. The best two came early on when Kellow burst through on Keough's pass after just 15 seconds but Brignull blocked his shot, then in the sixth minute Roberts robbed the same de fender wide on the left and sent an opportunist shot over the stranded Moseley but into the side-netting. Plenty of other promising moves came to nothing as City repeatedly rattled an uncertain looking Cardiff defence. But the Welsh side survived to mount a couple of dangerous attacks of their own. Curtis, the former Welsh international was on the end of both. He curled a fine shot just wide in the 33rd minute although the linesman was flagging for the umpteenth offside against Cardiff and two minutes later snatched at another effort when he had more time to set himself for a better strike. Paul Wimbleton brought the first real save out of Shaw in the 48th minute with a blistering drive and that sparked off a good spell of pressure from a largely disappointing Cardiff side. Rogers and Curtis were the main danger men but so often City's well-drilled de- fence snuffed out the threat with a well-timed tackle or a quick step up to spring the offside trap. O'Connell's arrival looked like the signal for Roberts to go off. The eager young striker had been injured in a tackle with Boyle in the first half and had to go off for prolonged treatment. He limped back and battled on bravely well enough for manager Colin Appleton to gamble on pulling Kellow off instead of him. The gamble paid off as the lively combination of Roberts and O'Connell caused Cardiff all sorts of problems in the last half hour. O'Connell had at least three good chances to break the deadlock and Roberts and Sean Priddle also went close after Shaw had saved well from Cardiff's best player Nigel Vaughan. But the real drama came in the dying minutes. First Steve Harrower hit the post and Keith Viney thumped the rebound way over the bar then came the penalty incident in the second minute of injury time. The spot kick was awarded for shirt pulling referee Paul Vanes doing well to spot it in a crowded penalty area. Roberts stepped up to take it but Appleton leapt off the bench to order McCaffery forward. The big defender took over and the rest is history. 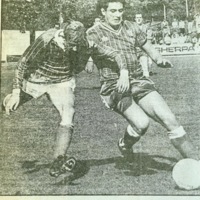 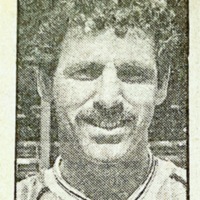 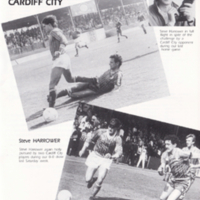