EXETER CITY are still in with a fighting chance of reaching the money- spinning second stage of the Littlewoods Cup after last night's frustrating no score draw with Third Division Newport County in the first round first leg at St James's Park. They go to Somerton Park next Tuesday for the return clash knowing they have little to fear from the Welsh side. City should be taking at least a one-goal lead with them after creating plenty of chances last night. They even missed a penalty. The guilty man was midfielder Paul Batty who put his eighth minute spot kick wide of the post. Newport goalkeeper Mark Kendall was kept busy throughout the game as City laboured away in difficult slippery conditions. "I thought we did enough tonight to have won the game but I think the players are confident enough to go there next week and finish the job," said City manager Colin Appleton. "It wasn't as tight and tidy as Saturday but the desire to win was still there and that has to be encouraging for the second leg. We haven't been beaten so I don't feel the players have anything to be despondent about." The disappointing thing was that City couldn't convert their territorial advantage into goals. Appleton made four chan- ges to the side that beat Orient five days ago. Goalkeeper Mel Gwinnett had a slight injury so John Shaw returned at No 1, Nick Marker replaced Sean Priddle at centre back, and Darren Gale and Brendan O'Connell took over from Tony Kellow and the injured Dean Roberts up front. There wasn't quite the same cohesion in attack but City still worked hard at overcoming Newport's annoying offside tactics. Newport despite player-manager Jimmy Mullen's protestations to the contrary were happy to sit back and settle for a draw. They threatened occasionally through Steve Mardenborough and when full back Linden Jones joined the at- tack, but in general they showed no spirit of adventure. City were always the livelier side, particularly in the first and last 20 minutes of the match. Early on Gale and Batty had caused Kendall prob- lems before the penalty incident when Danny Keough was brought down by Darren Peacock. Batty, who had already struck a good free kick, volunteered to take the penalty but hit his right foot shot wide. He almost made amends 15 minutes later with a fine header from Steve Harro- wer's cross as City kept on top, but the game deteriorated towards the end of the first half. Newport were little a more positive for brief spells either side of half time but Shaw and his defence coped well as the rain made conditions increasingly awkward. Priddle came on in place of Batty after 50 minutes to tighten things up in midfield and attempt to improve the service to City's strikers but within three minutes of his arrival he was booked for a foul on John Lewis. Kendall had to make two excellent saves from O'Connell before Kellow arrived on the scene replacing Gale who had faded after a fine start to add much needed inventiveness to city's forward play for the last 20 minutes. Predictably, he pepped things up instantly and almost scored with a sharp 73rd  minute volley that bounced off Kendall's chest with the Newport 'keeper knowing little about it. Unfortunately Kellow's intelligent prompting didn't quite do the trick


Exeter City have made life difficult for themselves when they visit Somerton Park for the second leg of this Littlewood's Cup clash. Throughout the game City did not show the form that gave them their win over Orient to start the season. For the first 15 minutes against Newport County, Exeter were an all action combination, moving swiftly and smoothly. When Paul Batty cracked his spot kick outside an upright, City still had other chances to have pounced and snatched the lead. But then the fire went out of their approach work, and Newport without creating too many positive chances came more into the picture. Newport went home well satisfied to have contained the first leg game to a goalless draw. 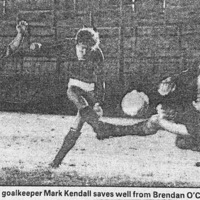 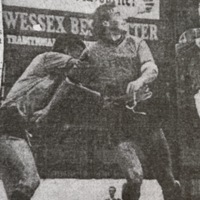 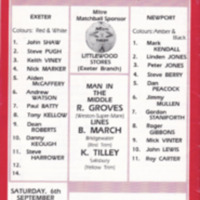