Martin Ling settled a scrappy derby clash, eased Exeter City's re-election worries and plunged struggling Torquay United deeper into trouble. But Ling will hardly score a softer goal than the one which bobbled past surprised Torquay goakeeper Fry, who totally misjudged the 20 yard shot in the 77th minute. City could have been two or three up at half time. They made Torquay look ponderous early on with Steve Harrower in particular, driving Exeter forward.

McNichol headed against the Torquay post, Kellow shot wide when well placed and then had a genuine claim turned down. Fry made a string of saves but the scoreline remained blank at half time. 5 minutes into the second half Torquay were awarded a penalty when Marker pushed Walsh in the area. Phillips made no mistake to give the Plainmoor men a fortunate lead.

Five minutes later Fry stopped, but failed to hold a powerful header by McNichol from Ling's corner, and the opportunist Kellow hooked home the equaliser. Both teams seemed to have settled for a point, though Ward and Jackson underlined City's superiority with Volleys just wide.

Exeter City threw a neighbourly kiss of life to trouble torn Torquay United at Plainmoor yesterday and it was that man Tony Kellow at the centre of attraction again. This time though it was for all the wrong reasons. Kellow, so often a one man rescue act for City, came unwittingly to Torquay's aid with a moment of madness. His suicidally weak back-pass let Alan McLaughlin in for a 69th minute equaliser after Dean Edwards had given City the lead just three minutes earlier.

The Fourth Division point, courtesy of Tony Kellow, could prove vital to Torquay as they hover above the trapdoor to non-league obscurity. And they could have had all three points but for a goal-line clearance from their ex full-back Steve Pugh three minutes from time. Neither side could feel particularly satisfied with the result. It means that City still haven't won away this season and they have only two games left at Aldershot and Tranmere to rectify that. Torquay desparately needed a win to feel a little more confident that this was not the last Devon derby between these two old rivals. 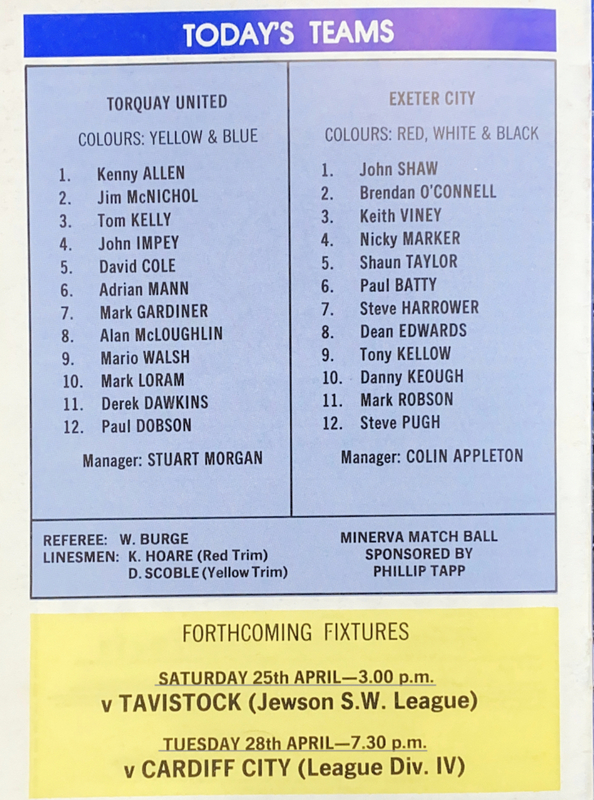