EXETER CITY crept quietly back among the Fourth Division pacesetters last night by beating lowly Hartlepool who had substitute Dean Gibb sent off 10 minutes from time. City equalled a club record by stretching their run of games without defeat to 12 but they did it with very little conviction or panache. There was no sign of the confidence and composure you might expect from the only unbeaten team in the Football League. Superbly taken goals by Brendon O'Connell and Paul Batty were the high spots of an otherwise scrappy performance before a healthy-sized crowd of 2,660. O'Connell's fifth goal of the season after just eight minutes should have settled any nerves sufficiently for City to have taken control of the game. But instead, Colin Appleton's shrinking violets surrendered the initiative on a fast surface and were almost punished for their hesitancy on a couple of occasions before Batty's crack- ing 65th minute volley put the result beyond reasonable doubt. Hartlepool's marked lack of penetration and some alert work from goalkeeper John Shaw ensured that City did not pay too heavily for their indifferent performance. They survived a couple of scares before finally taking control and there was encouragement for Saturday's home clash with Burnley in the performance of debut striker Steve Biggins. He couldn't quite crown his long-heralded arrival with a goal but he had a hand or more precisely a head in the two that were scored. The big front-runner showed some deft touches on the ground but it was his aerial power that caused most problems for the Hartlepool defence. He worked himself into some useful positions but he and young Mark Robson in particular suffered from a distinct lack of service from midfield and defence. That is something City need to work on, especially as Biggins showed just how dangerous he can be with the right sort of crosses. His neat flick put the lively O'Connell in for goal No 1 and the young striker, now City's top scorer, proved what a good finisher he is, drawing goalkeeper Eddie Blackburn before slotting the ball calmly into the empty net. The early goal looked like a perfect foundation on which City could build an emphatic win and for a while they threatened to over-run poor Hartlepool. But it didn't last and Hartlepool battled battled back strongly with Nigel Walker, Brian Honour, Kevin Dixon and Gibb all threatening before half-time. Hartlepool's best chance of an equaliser came in the 51st minute when Aidan McCaffery's slip let Dixon in on a crossfield Rob McKinnon pass but the over-eager striker blazed wildly wide with only Shaw to beat. That let-off jolted City into a more positive spell and Sean Priddle and Biggins went close before Batty wrapped it up. Keith Viney's cross was laid off perfectly by Biggins to Batty who thrashed an unstoppable shot into the roof of the net from the edge of the penalty area With City in firmer con- trol, Hartlepool lost some of their spirit and discipline and Gibb was sent off for his second bookable foul on Batty. Viney and Walker were also cautioned for a second half tussle. 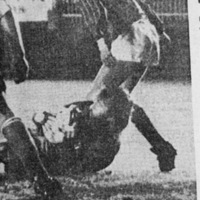 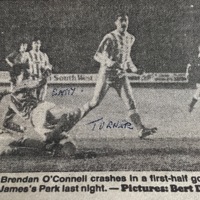 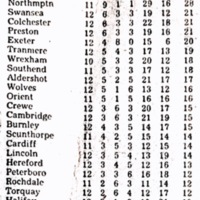