STEVE PHILLIPS heightened his reputation as one of the most unpopular players to visit St James's Park by becoming the first man to score against Exeter City there this season and steal a point on his Peterborough debut on Saturday. The roly-poly striker grabbed an undeserved equaliser in the 78th minute after Mark Robson had given City a dramatic early lead after just 31 seconds. Phillips upset City fans last season with his dive and deceive routine for Torquay United in four Devon derby games. He was was booed almost every time he touched the ball on Saturday although that wasn't very often, but he left the crowd in stunned silence when he cashed in on a defensive blunder to launch his one-month loan spell from Torquay in style. City should have had the game wrapped up long be- före that though and thought they had when Robson put the ball in the net for the second time in the 73rd minute. It looked a legitimate goal but the inconsistent team of officials combined to rule it out for offside. Nick Marker also forced a fine save out of Peterborough goalkeeper Kevin Shoemake and Andrew Watson hit the post as luckless City struggled in vain to make the points safe before Phillips struck. Soccer sages say that young players blow hot and cold and that certainly seems to be the case with City who have gone right off the boil after that blistering win over Burnley a fortnight ago. Missing injury victims Aidan McCaffery and Steve Biggins, they toiled tirelessly but with very little purpose. There was plenty of effort and endeavour as usual but no imagination. To be fair, the ball rarely ran kindly for City who struggled to string more than three passes together all afternoon. Peterborough's persistent off-side tactics didn't help an already poor game. It bored the crowd but effectively thwarted several promising City attacks and starved the match of much needed goalmouth incident. City manager Colin Appleton defended his side strongly despite the disappointing result. "It was a good performance after two defeats. We were the better side and we deserved to win. But the players must learn to ram home their superiority. Going 1-0 up so early took the pressure off the opposition. Although the points have slipped the performance was good enough to gain a little bit of confidence from," he said. Appleton admitted that his reshuffled side were apprehensive and lost concentration for the last 20 minutes but refused to con- demn their lack of invention. "We'll win more games than we lose playing like that," he said. City should have punished a poor Peterborough side after that tremendous open- ing. Brendon O'Connell set up the quickfire start with a powerful run into the penalty area from the right, setting up a sadly out of touch Tony Kellow for a tame shot. Luckily, though, the ball deflected to Robson who calmly controlled it before steering home his third goal in only six senior appearances. And that was the peak of the first half excitement. Watson, looking uncomfort- able in his surprising switch with Keith Viney from sweeper to left-back, blasted one good chance high on to the Big Bank and Kellow and O'Connell fluffed another opening between them. At the other end John Shaw saved well at the flying feet of Phillips and Les Lawrence as Peterborough made a few token attacks. City were more forceful in the second half when Marker powered in a 58th minute header from Paul Batty's corner only for Shoe- make to deny him a certain goal with an acrobatic reflex save and Watson thundered a 66th minute volley against the post with the 'keeper well beaten. Then came Robson's well-taken but disallowed second goal which was per- haps a heavy hint that it wasn't going to be City's day. Peterborough confirmed that 12 minutes from time. Shaw, redundant for most of the match, was beaten by Lawrence's near post flick to Derrick Christie's corner and Phillips was waiting behind to force the ball home from close range. It seemed inevitable that if anybody was going to ruin things for City it would be Phillips almost as predictable as a booking for the little Londoner. He was cautioned for kicking at Batty.

Viney, Lawrence and Steve Collins also had their names taken. 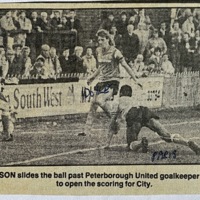 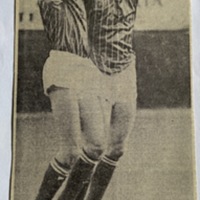