DEAN ROBERTS, the big-hearted striker who was once told he would never play foot- ball again, continues to defy the experts and turn in match-winning performances for Exeter City. He was the hero of Saturday's hard-earned win Over Tranmere Rovers at St James's Park with his sixth goal of the season in the 52nd minute. It's no small wonder that the 19-year-old forward enjoys his success so much as less than two years ago his career was in tatters. He smashed his ankle so badly that he needed a metal plate and steel pins to rebuild the shattered leg and he still bears the horrific scars from that agonising injury.
"The doctors told me that I was finished but I was determined to prove them wrong," said the gusty teenager. He hardly had the chance to reach his full potential with Bolton Wanderers before they released him this summer but he has certainly produced the goods for City. Saturday's winner pushed the club up into fifth place in Division 4 and sets them up well for a difficult schedule over Christmas and New Year. Manager Colin Appleton was particularly pleased with the way his side coped in the heavy conditions. Torrential overnight rain had left the pitch sodden and it cut up badly as the game wore on. But City lasted best on the sapping surface. They struggled to find much rhythm in the first half but were far more positive and creative after the break. Aidan McCaffery, playing his first senior game for more than a month after an elbow injury, hardly put a foot wrong and City looked a steadier defensive unit with him back in the side. That extra stability allowed fill-in right-back Steve Harrower to adopt a far more attacking role. He pushed effectively into midfield and caused Tranmere's defence plenty of problems with his jinking runs and tight dribbling. Paul Batty was at the heart of most dangerous City moves and, with Sean Priddle playing the midfield anchor man fairly confidently, Danny Keough showed far greater adventure in linking with his forwards. But while Tranmere operated a sweeper system in defence, Roberts and co-striker Steve Biggins hardly got a look at goal in a got a look at goal in a scrappy first half. Tranmere made the livelier breaks early on with top scorer Ian Muir leading the forward line well and Adrian Thorpe and John Morrissey causing problems down the flanks. They didn't give goalkeeper John Shaw too much to worry about, however. The closest they came to scoring was when Steve Mungall miskicked, fortunately for City, from six yards and the impressive Morrissey fired across the face of the goal. City were restricted to just two chances before half-time. Roberts headed one of them off target and 'keeper Tim Dalton made a fine save at the feet of Batty. The match livened up towards the end of the first half and City maintained the impetus after a talking to from Appleton. Their more purposeful approach brought its reward seven minutes after the re- start. Harrower pushed the ball to Keough on the left and he crossed for Batty to hit a first time shot at the far post. He didn't connect properly but the ball ran kindly for the opportunist Roberts who slid in to stab the ball over the line from close range. It was all City from then on. Dalton did well to hold a rising shot from Priddle cleanly, Harrower blasted over the bar, Roberts fired into the side netting and the 'keeper denied Batty when Biggins set him up. While there was only a single goal in it though, City were still vulnerable and Tranmere player-manager Frank Worthington brought himself off the substitute's bench after 75 minutes in the hope of inspiring a fight- back. He almost did the trick by setting up a near equaliser for Gary Williams seven minutes from time but the full-back headed over from four yards. Tranmere's last chance had disappeared and City were left celebrating their 13th home game without defeat. 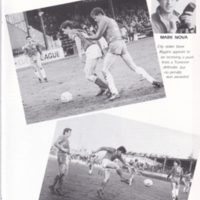 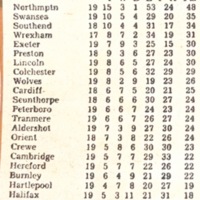 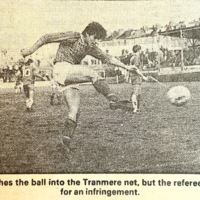 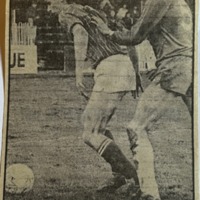