DAVID Reeves, the 18-year-old striker on loan from Sheffield Wednesday, made a dream debut as Scunthorpe United came from a goal down at half-time to sew up a comfortable win over Exeter and give the Old Show Ground faithful an early Christmas present of three points. Reeves a man with a knack of being in the right place at the right time- scored two close-range goals. And midfielder Dave Hill easily the man of - the match for me, capped a fine all-action dis- play by rifling in a superb third goal five minutes from time. In the first half it looked as though the Iron were really missing injured skipper Dave McLean in midfield and suspended striker Steve Johnson. But as the game wore on the new-look Frank Barlow line-up got better and better. Exeter looked a work- manlike side in the first half passing crisply in midfield but paid the penalty for defensive slackness with 'keeper John Shaw the main culprit. He was at fault with both Reeves' goals. The visitors adopted a negative approach in the second half, and a physical one. And a less lenient referee would have collected more names than those of defenders Keith Viney and Andrew Watson. After a couple of preliminary sorties, United might have gone behind very early on when a poor backpass by player-coach Richard Money sold Paul Gregory short, but the 'keeper did well to move off his line and collect at full-stretch as danger threatened. Julian Broddle won applause for a neat backheel to keep what seemed a lost ball in play, and after 13 minutes he was unlucky to see a header from a corner acrobatically headed over his own bar by Viney. At the other end, the skilful Dean Roberts tested Gregory twice in a minute, while Billy Russell drew a good low save from Shaw when the Iron replied. Les Hunter joined the attack and saw Viney kick his far post effort off the line. Then Paul Batty was in the same place to deny Russell. Hill, driving forward down the left touchline slipped two tackles and got to the line only to drag his pass a yard the wrong side of the on rushing Broddle. But alarm bells starting ringing in the United defence when Steve Biggins was allowed to break free and draw a good save from Gregory.
The Iron did not learn from that,however and went behind on the stroke of half time. Hunter needlessly gave away a corner with a terrible back-pass, the kick was flicked on at the far post and Biggins applied the finishing touch, following a scramble. It was a real gift goal for a side who have yet to win away this season in the League. There was little sign at the start of the second half that the Iron were to fight back. Dave Harle making his home debut and playing against one of his former clubs - was booked for a foul after 54 minutes. And, a minute later, Biggins rattled Gregory's right-hand post with a stinging drive. But after Exeter's Andrew Watson has been booked for upending Hill, United struck back. Russell tried a 64th minute shot which Shaw should have held but didn't, Harle had an effort blocked and the loose ball fell to Reeves who made no mistake. The second goal followed soon after the booking of Viney for a tackle on Broddle. Hill saw his shot fumbled by the 'keeper and Reeves again netted from close-in. That was 11 minutes from time, and it was only fitting that Hill should complete the scoring six minutes later with a magnificent shot into the top corner from the edge of the box. 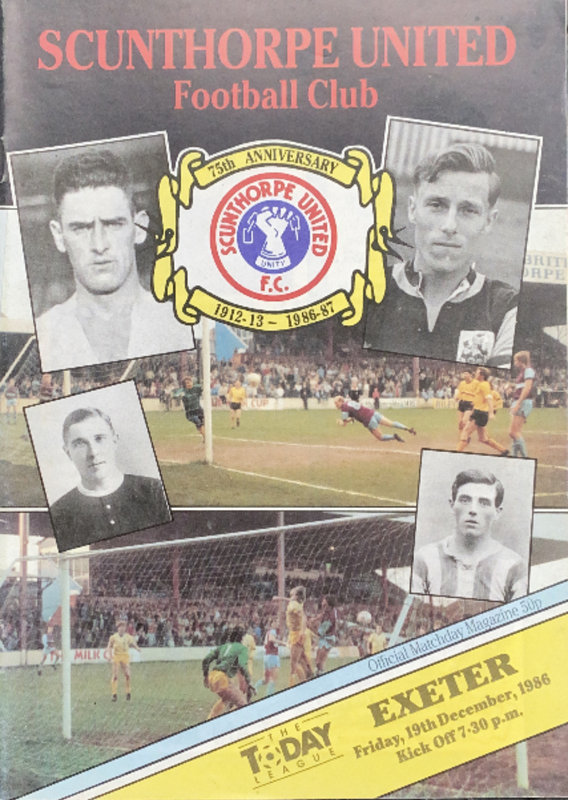