A CHOKER FOR CITY

EXETER CITY manager Colin Appleton left Southend last night bitterly disappointed after what he described as "our best away display this season" failed to reap any reward. "I am upset at the result because this was a vital game for us against a side - also up in the promotion race," said Appleton. "It was a virtual six pointer. "But I was proud of our performance. We played superbly and certainly deserved to get something out of the game. "The lads have set their own standards now and I shall expect them to maintain this peak from now until the end of the season. If we do then promotion is still not out of our reach." Certainly Exeter could feel more than a little aggrieved that they did not make the long trip home with at least a point to show for all their endeavours, and for that they can blame one man home 'keeper Sim Stannard. The Southend hero pulled off two magnificent saves in the second half as the men in front of him wilted under intense pressure. First he threw himself across goal to turn away a div- ing header from Martin Butler after 61 minutes, but reserved his best for the very last minute of a pulsating match. Danny Keough looked to have salvaged a draw with a cracking shot on the turn only to hold his head in despair as Stannard somehow clawed the ball out from under the bar. Earlier impressive make shift fullback Brendon O'Connell had seen a fierce 30 yard free kick cannon off the cross bar while only a couple of desperate last ditch tackles from star home defender Shane Westley saved dangerous situations. And Exeter had got off to best possible start goal inside the first 30 seconds. O'Connell and Tony Kellow played important roles in the build up and when the ball broke loose, there was teenager Mark Robson to curl a fine shot in off a post. Southend battled back and John Shaw was forced to make smart saves to deny mid-fiel- der Glenn Pennyfather and top marksman Richard Cadette. But there was a definite question mark over Shaw's handling when Derek Hall fired in a shot from fully 35 yards which squirmed under the keeper's hand into the net for the 32nd minute equaliser. The second half produced exciting end-to-end stuff with Exeter's defence, well marshalled by sweeper Keith Viney, living up to its mean reputation until the fatal 66th minute. And to rub salt in the wound it was former Exeter winger Martin Ling who popped up- after Cadette had stabbed the ball forward to go round Shaw and plant the ball in the net for the vital points clincher. 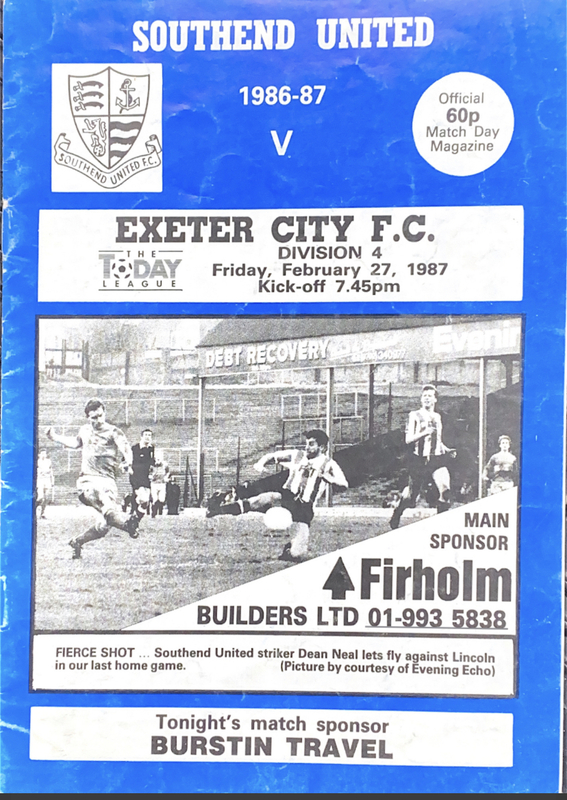