Master marksman Tony Kellow threw Exeter City a promotion lifeline on Saturday with his 10th goal of the season against Hereford United but a moment of madness from key defender Nick Marker may well have tugged it away from them again. Kellow's 58th minute winner kept City in the play-off hunt, the three precious points keeping them in eighth place in the Fourth Division table. But Marker was sent off in the 76th minute for a rash tackle on Paul Butler and the resulting automatic suspension could cost City dear in the run-in to the end of such a promising season. The big centre back, already banned from next Wednes- day's match at Hartlepool for topping the 21-point discipli- nary limit, was booked on the hour for fouling Phil Stant. Coventry referee Keith Barratt had little choice but to dismiss him when he lunged in incredibly late on Butler 16 minutes later. Marker's untimely departure heralded a final period of intense Hereford pressure but City worked hard to protect their slender lead. It was a competitive but scrappy game with neither side developing any real pattern to their play on a bumpy surface. There were three other bookings for fouls Keith Viney and Shaun Taylor for City and Ian Rodgerson for Hereford all in the last 20 minutes. City had two players making their home debuts. Paul Olsson, the new loan signing from Hull City, had a steady full game in the centre of midfield. He did nothing spectacular but didn't make too many mistakes either. Striker Paul Williams came on to partner Kellow up front for the last half hour in place of Paul Batty and competed well against Hereford's big, experienced central defenders. But the overall picture was a little disjointed from City's point of view. Manager Colin Appleton had few options open to him with such a small squad, especially as Steve Pugh is still recovering from chickenpox and Dean Roberts was ruled out with an ankle injury. He left Kellow ploughing a lone furrow in attack with Batty doing his best to support in a new front-runing role. With Hereford getting the tackles in smartly in midfield and leaving City little room to operate up front, the system failed. City had two good chances early on when Hereford goalkeeper Kevin Rose had to be at his best, first to deny Batty from a ninth minute snap-shot and then to thwart Taylor who rose majestically to head goalward in the 12th minute. But they faded badly bet- ween then and half time as Hereford, busy in midfield and pacy down the flanks, created the better openings. Taylor had to block from Butler, John Shaw held on well to shots from Steve Devine and Rodgerson and a couple of cheeky flicks from Stant and Ollie Kearns, and Steve Harrower put in a superb tackle to block Mick Carter when he was in a great position to score. City started the second half with far more purpose as full- backs Harrower and Brendon O'Connell showed a greater willingness to link up with their service-starved attack. Both men sent in testing crosses from the flanks and that extra pressure set up a 47th minute chance for man- of-the-match Taylor but Rose again did brilliantly to keep out the defender's shot. The reward for this more adventurous approach was Kellow's decisive goal.

Hereford cleared a corner only as far as Robson, he lobbed the ball intelligently back into the danger zone and as Kellow and Taylor challenged, Kellow managed to get the final nudge to force it over the line. Apart from an off target Taylor header though, City didn't muster another serious threat to Rose's goal while Hereford beavered away in search of an equaliser. Four minutes after Marker's dismissal, Hereford brought on former City skipper John Delve for the injured Stant, there  occurred late flurry of shots on Shaw's goal... 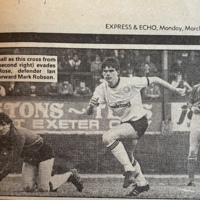 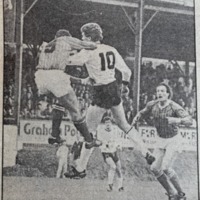 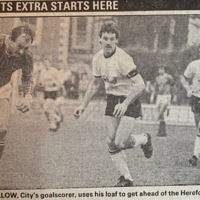