HARTLEPOOL threatened to throw the game away despite grabbing an early lead and playing the entire second half against 10 men. The performance was impressive enough and the points absolutely vital, but what should have been a comfortable win was made to seem incredibly difficult by poor finishing

Veteren striker Alan Shoulder was back to his best in his first game this year and he cracked in a superb 12-yard drive after the defence splitting pass from Roy Hogan after 17 minutes. Shoulder went went close again shortly afterwards when a shot from the edge of the box was tipped away by John Shaw and the keeper pulled off another fine save on the half hour to deny Brian Honour. On the stroke of half time Exeter's Tony Kellow was ordered off for dissent by Burnley referee David Scott

After the break Hartlepool looked capable of adding to their total with ease, until the ball got into the box. Kevin Dixon, Nigel Walker and Honour all missed good chances and Shaw pulled off a series of fine saves. Already down to 10 men. Exeter could have been further depleted when Brendon O'Connell brought down Honour as he sprinted clear and then Steve Harrower felled Rob McKinnon in an off the ball incident. Hogan had probably the easiest chance of the game after 82 minutes when a low cross found him clear a yard out but he miscued and the ball was scrambled away. In the last minute Andy Toman raced clear and looked certain to score until he was tripped by Shaw. Hogan stepped up to take the penalty but his effort, into the left hand corner was magnificently saved by Shaw. 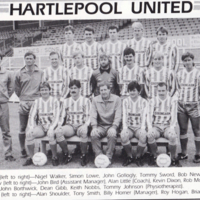 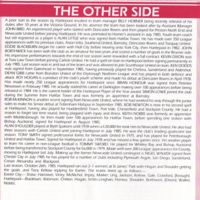