TWO GOALS from Dean Edwards looked to have ended Exeter City's run of six games without a win against Halifax on Saturday. But a harsh penalty decision in the last minute of normal time gave Phil Brown the chance to snatch a deserved point for the Yorkshire side. The penalty was awarded by Welsh referee John Deakin for handball against Brendon O'Connell but City were left questioning whe- ther it was an intentional of- fence and if it was in the penalty area at all. And that wasn't the only decision they were unhappy with. After Edwards had first cancelled out Russell Black's opening goal for Halifax then given City an 86th minute lead, substitute Steve Harrower set up the chance for Danny Keough to put the result beyond all doubt. But just as the luckless midfielder was about to strike home his first ever goal for City, Mr Deaking blew his whistle, consulted his linesman and gave a free kick to Halifax for offside. Keough, who has come in for a great deal of criticism from supporters lately, could not believe his bad luck and moments later Halifax rubbed salt into his stinging wound by forcing a draw from the penalty spot. Drawn games haven't been Halifax's speciality this season that was only their eighth, but they certainly have become a monotonous habit with City. That was their 20th in the league this season and was witnessed by their lowest league gate of the season. And if City were bewildered by a couple of refereeing judgements, then there were a few heads being scratched in the crowd when the team was announced at 2.30. The absence of fans' favourite Mark Robson and solid defender Shaun Taylor seemed particularly puzzling. Taylor was the unlucky victim of manager Colin Appleton's decision to stick to four men across the back with Steve Pugh coming in at left back. Robson was left out along with Steve Harrower after an unsuccessful City performance with two wingers at Orient in midweek. Appleton went for a three pronged attack with Dean Roperts and Tony Kellow recalled alongside Edwards and Keough and Paul Batty restored to midfield. "I felt changes were necesary but I suppose the only thing that justifies changes is winning. I'm disappointed we didn't do that," admitted Appleton afterwards. City might have had a solid platform for a confidence boosting victory, but for some outstanding saves from Halifax goalkeeper Ronnie Sinclair early on. Paul Sanderson had tested City's defence with three dangerous crosses before Sinclair, on loan from Leeds, performed his initial heroics. He made an unbelievable reflex stop to deny Roberts from Pugh's cross in the eighth minute, saved confiently low to his right from Edwards when Keough put him through five minutes later, and flew full length again to keep out a deflected Keith Viney blockbuster midway through the half. So it was slightly against the run of some otherwise scrappy play that Halifax took a 34th minute lead, Sanderson again providing the cross for Black, briefly on trial with City last season, to rifle the ball home from 15 yards. An Alan Alan Knill blunder handed Edwards the equaliser three minutes later. The lanky defender was trying to guide the ball back to his 'keeper but Edwards nip- ped in smartly between them and poached a neat goal. He came close to making it 2-1 before the break, showing typical opportunism to pounce on a loose ball and put one Ishot wide then just failed to connect properly with an O'Connell cross.

In the second half Halifax, with David Longhurst looking particularly dangerous whe- never he got the ball, had three good early chances to restore their advantage. City 'keeper John Shaw did remarkably well to block two efforts from Mick Matthews and Black, and Black should have done better with a lazy shot when he was left unmarked at the far post. City's attacking pattern was disrupted in the 58th minute when Roberts was stretchered off with an ankle injury but Harrower was lively enough when he came on to cause problems of his own to a hard-working Halifax defence. They had to survive a 73rd minute scare when the other- wise immaculate Nicky Marker gave the ball away to Rick Holden who smacked a shot against the foot of Shaw's post. But City responded 10 minutes later by hitting the post themselves. Keough's header from a corner was only partly cleared and Harrower crashed the ball against the upright with Sinclair well beaten. It looked like City had got the winner, though, when Keough and O'Connell combined to send Edwards in for goal No 2, his fourth in five games since joining the club from Wolves. The striker's persistence paid off as his first shot was blocked and he followed up well to slot home the rebound. Then came the disputed incident that could have thrown City a slim promotion lifeline. It wouldn't be fair to call Keough's strike a disallowed goal because the referee's whistle had already gone and Halifax had stopped playing. But the decision was nevertheless frustrating, especially for Keough in one of his most positive displays of the season. The last gasp penalty made it even worse. 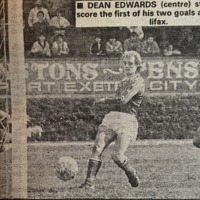 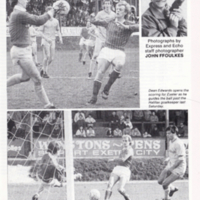