Tony Kellow, goalscorer extraordinary, once again popped up in the dying seconds of the game to scramble a dramatic equaliser. Swansea's Paul Raynor's header from close range had given his side the lead in the 83rd minute and set the stage for Kellow's recovery act. Swansea took the lead after just 48 seconds when, from a Tommy Hutchinson free kick, Colin Pascoe seized on to a flick on by Andrew Melville and scored from close range. Exeter responded in the 6th minute following a Paul Batty free kick. Kellow equalised with a left foot volley on the turn. Swansea almost scored within 50 seconds of the second half when John Shaw saved first from Pascoe and then somehow, he kicked away a close in effort from Sean McCarthy, who had followed in the initial shot. At the other end, Kellow just failed to beat goalkeeper Mike Hughes to the ball inside the six yard area, his swallow dive going unrewarded by the referee.

Mark Robson had the beating of right back Chris Harrison, but several good moves, prompted by Keith Viney down the left, failed to produce any clear cut openings. Exeter continued to dominate the exchanges with Steve Pugh, Danny Keough and Batty keeping a tight hold in midfield.

Swansea gradually worked themselves back into the game and took the lead in the 83rd minute when Raynor, unmarked, headed a Paul Atkinson cross past Shaw. Swansea looked to be heading for an away victory, but they reckoned without the magic of Kellow and his ability to be in the right place at the right time. The well practised free kick produced a Shaun Taylor header and the veteran Cornishman had once again saved the day and produced yet another drawn game for the Exeter team, their 21st of the season. 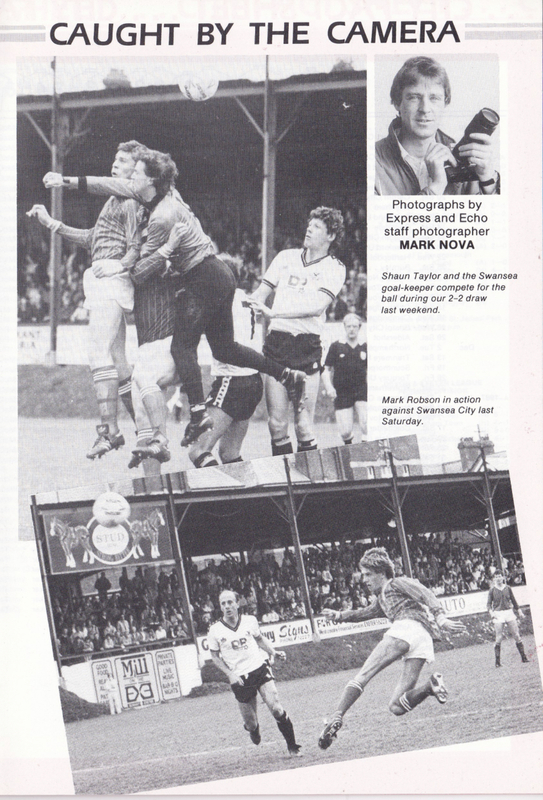