THE respective records of both the teams always suggested that Saturday's game at St. James' Park was most likely to finish in a goal-less draw. It certainly proved a dour affair as Exeter, with by far the best defensive record at home in the Fourth Division this season, kept out a Scunthorpe attack who have regularly been short of goals on their travels. The few chances that there were in the game all fell United's way, but they let themselves down badly in front of goal, with Andy Flounders and Julian Broddle both guilty of poor finishing.

The 0-0 scoreline means Exeter can claim a place in the Football League's history books, equalling the tally of 23 draws in one season set up by Norwich City back in 1978/79.

But it was the first time the Iron have been involved in a goal-less draw since New Year's Day 1986, some 65 games ago. On a warm, sunny afternoon in Devon, and with nothing at stake for either club, the match was lacking in passion in front of City's lowest crowd of the season. On a hard and uneven playing surface both teams at times struggled to control the lively ball and there was little construc tive work from either midfield. Apart from a brief spell of pressure in the opening minutes, Scunthorpe always looked comfortably in control and produced the best glimpses of footbal. They often looked dangerous in the air from set pieces in an around the box, but what they could not do was find a way past reserve golkeepr Mel Gwinnett. He was making only his fourth league appearance as deputy for the injured John Shaw and he kept his side in the game with two vital saves - both with his legs. Scunthorpe, unchanged for the third successive time under new manager Mick Buxton, survived an early flourish from Exeter without many problems. Richard Money, Steve Lister and Les Hunter kept the two-man home strike force of Dean Edwards and Dean Roberts in such close check that keeper Ron Green did not have one worthwhile shot to test him during the entire 90 minutes. Once United started to push forward they found themselves in command, though they found open- ings difficult to create against an Exeter defence which has conceded only 14 goals in 22 games at home this term. Flounders placed a looping header just wide from a Money free kick and Lister might have done better when he headed over the top after cimbing to reach a corner from Billy Russell which had been well flicked on at the near post by Steve Johnson. It was a similar corner routine from the left by Russell and Johnson which provided Flounders with a close range opening, but his shot was blocked away by the outstretched legs of Gwinnett. There was a spot of drama at half time when match referee Howard King reported feeling unwell and he was replaced in the middle in the second half by senior linesman Ken Bissex of Bristol, with a substitute official on the line. With Exeter able to make no impression going forward after the interval the opportunity was there for Scunthorpe to make their authority count. But Flounders again allowed Gwinnett to deflect the ball away with his legs from another close range opening set up by Dave Hill and then Broddle missed the best chance of the match. He did everything right as he exchanged a one-two with Johnson yet, with only the goalkeeper to beat from inside the box, he dragged his left foot shot wide of the target. Johnson himself placed a header just over in the closing stages and in the final minute substitute Alan Birch also went close with a shot from outside the box which dipped just too late as it went over the bar. Scunthorpe have now taken seven points out of nine since Buxton's arrival just over a week ago, and he will be pleased that they have still not conceded a goal under his charge. But the new boss will probably feel his side should have had the full three points again on Saturday. 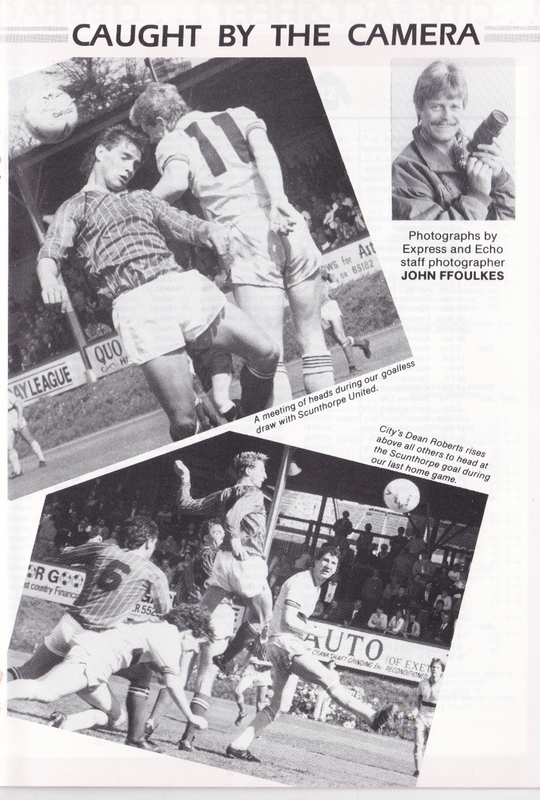