Bubbly flows on night to celebrate.

CHAMPAGNE flowed last night at Prenton Park after trouble-torn Tranmere Rovers assured their place in the Football League. A Gary Williams goal 13 minutes from time against Exeter City kept professional football alive on the Wirral, and relief that they would not be replacing newly promoted Scarborough in season's G.M. Vauxhall Conference. Rovers knew that victory over a side which had not won a League match away from home would secure their safety and avoid sweating it out overnight, leaving their destiny in the hands of others. Manager Johnny King, without a win in his six games since returning to the club, called on fans from both sides of the Mersey to cheer his team to success. The public responded magnificently with almost 7,000 nearly double Tranmere's previous best home gate of the season packed into the tiny ground, delaying the kick-off by 15 minutes. King said: "The crowd pulled us through. We finally got people into this ground, though I didn't want to attract them in this way. I hope we can keep them here." Rovers' early optimism quickly faded as Dean Edwards twice forced Billy O'Rourke into desperate saves. Exeter in a stubborn mood to preserve the League status of neighbours Torquay, could quite easily have gone ahead 10 minutes before the break when Robson's shot cannoned off the bar as panic struck the home defence. As the teams emerged after the interval a Rovers victory seemed miles away. "I couldn't see us fashioning a goal," commented the boss. But although Robson forced a save from O'Rourke, the Blues, inspired by long-serving skipper Steve Mungall, came to life. First Anderson's fierce drive was touched over by Shaw and then the Exeter keeper made a meal of Thorpe's long-range shot. But in the 77th minute, Prenton Park exploded. Top scorer Ian Muir produced a bit of magic in the box to send two defenders the wrong way and as his cross curled towards the far post Gary Williams popped up to head home. The crowd, young and old, spilled onto the pitch. One Dad even had to rescue his two toddlers who had ran on amid all the euphoria. But Rovers held on and the scenes at the final whistle were emotional. Everton's former Rovers defender, Derek Mountfield, could not hide his joy. "I'm delighted," he said. "The fans were superb it's like being at Norwich again when we clinched the League!"

"Tranmere Tranmere. chanted the crowd as the players drowned them in bubbly and threw them their strip. These were celebrations of survival rather than Cup success but to Rovers they meant the same.

Match Report 2
Dickie Delves INTO THE PAST
From an "ExeDirectory" Article
By Richard Shelton.

I took a day off work to travel to see this match, after all it promised to be an exciting and possibly historic game. Tranmere needed to win to be certain of retaining their League status, as prior to this game they only had forty-seven points. Indeed had City won at Prenton Park, Rovers and not Lincoln would have had the unenviable honour of being the first club to be automatically relegated to the Conference. We took the train to Liverpool, and upon our arrival at about four o'clock, we caught the underground rail service to Birkenhead. For a few minutes we wondered if we'd make the match, as the train suddenly stopped somewhere underneath the River Mersey. After a few minutes the driver, in a thick Scouse accent, announced, "Normal service will be resumed shortly the delay was due to some hooligans cutting the electricity cables". There's no answer to that is there ?!  By the time we reached Prenton Park, some ninety minutes before the kick off, there was already a large crowd waiting to go in. As we made our way towards the away end we were passed by Gerald Sinstadt and his B.B.C film crew; did I detect a laugh when he saw our City scarves! With that the City players' coach arrived, and with it some complimentary tickets. We entered the grandstand, only to find it full of Tranmere supporters, sporting Liverpool and Everton scarves. Others clearly thought that wasn't enough, and were wearing beach shorts, party hats and face masks. Apparently, that evening's Liverpool Echo had urged all Blues' and Reds' fans to go along and support the Mersey minnows. I decided to join the few other City faithful in the away terrace. The kick off was delayed for ten minutes by the large crowd still trying to get into the ground. The City players were already on the pitch waiting to start when the Tranmere players ran out to an incredible reception from the crowd. When the game finally got underway, every Tranmere touch was cheered and every City touch booed. Exeter looked very sharp for the first twenty minutes, culminating in Mark Robson hooking a beautiful shot against the crossbar with the keeper well beaten. Gradually though, the homesters started to bombard the City penalty area, but thanks to some good defending, good goalkeeping and poor finishing the first-half ended goal-less. It was all one way traffic for most of the second half, with Tranmere doing the attacking. A goal looked certain to come, and when it did the celebrations were, in the words of David Coleman, "er extraordinary". Tranmere's fans invaded the pitch and refused to get off, party hats and all sorts of strange objects were being hurled around the ground and a chant of 'Tranmere, Tranmere' echoed around the ground. After that there was no way that City were going to equalise, if they had we'd have been lucky to get out of Liverpool in one piece. Upon the final whistle the players were lost in a sea of Scousers, which had engulfed the pitch. The Exeter fans picked their way through the celebrating throng, as we had to leave the ground through the same exit as the home supporters. As we left, the celebrations were in full swing. The Tranmere players had made it to the directors' box, where they were now stripping off and throwing their kit into the jubilant crowd. Somehow, defeat wasn't quite so hard to take. 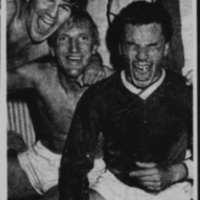 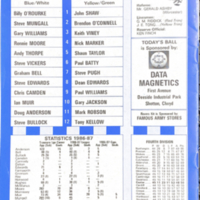