I went to Charlton on the Grecian Express, a.k.a the 7.53 to London Paddington. As we pulled into Paddington the guard ended his tannoy signing off with "and to all the Exeter fans onboard, enjoy the match". After a quick tube trip to Charing Cross we caught a train bound for Charlton. On route we passed a football ground that wasn't The Valley. A man sat next to us said "that's Millwall, you don't want to go there". He seemed surprised that we intended to make the trip and laughed when we suggested we would be doing so in full body armour.

On arrival at The Valley we visited the club shop. Here we spoke at length to a member of staff about Stuart Fleetwood and our differing fortunes since the F.A. Cup tie back in 2003. We left with him wishing us well for the season, and hoping that we would enjoy our day. Outside, lots of Charlton fans were milling around the car-park waiting for their players to arrive. They were as welcoming as the man in the shop. I spoke at length to a 62 year old lifelong fan of Charlton whose house we could see as we talked, and a lovely little girl called Jessica and her family. Jessica even introduced me to 'Rosie the Rabbit', her version of Grecian the Lion! Grecian was particularly popular in the car-park, being patted on more than one occasion and even receiving a smile from Rob Elliot, Charltons keeper! There was however one moment of controversy when a steward accused him of being from Millwall. With Millwall their nearest and least dearest, this was definitely not a good thing! Before we went into the ground we took time to visit Horacio and Gloucester, the away end Police horses.

Gloucester was clearly a fan of my retro purple away shirt and took to eating it! It was somewhat of a battle to retrieve it. He was determined.

Further reason to like Charlton came inside the ground where allocated seating was suspended. Now, picture the scene. Me and Marge were sat just to the right of the goal. Marges bottle of coke rests on the railing in front of us. The team had gone in to get ready and the subs were out on the pitch practising shooting. I think you can guess what happened next. An unidentified player (although Ben Watson appears to be prime suspect) shot at an open goal, missed it and struck the bottle. The bottle flew up into the air with its contents drenching me and Marge. Amidst the laughing Marge was crying out for a refund, the bottle had cost her £1.90 and between us we were now wearing approximately £1.85's worth!

The game, and performance from City, was brilliant. Although City only scored one goal, through my inability to see the linesmans flag I celebrated two. Here of course refer to Craig Noones disallowed goal. I was so sure it had gone in that I was somewhat confused when, after sitting back down, I looked back up to see a goal kick being taken. Unfortunately for those sat near me for the majority of the second half

we had to put up with the disgraceful behaviour of a small group of people sat in the second row. I refuse to call them City supporters. Their language and chanting at Charltons goalkeeper was despicable. The brilliant stewards warned the ringleader twice but he took no notice and took to abusing the stewards as well. In the end they were left with no option but to remove him. His pals disappeared with him. We were able to go back to enjoying the game. City kept pushing and we kept hoping. Even when we went 2-0 down I felt we had a chance. Berties goal gave us optimism but the final whistle just came too soon.

I had a brilliant day at Charlton. It's a real family club with supporters and staff who go out of their way to ensure home and away supporters are able to enjoy their time at The Valley. For once we were respected. Too many times at away games we get herded like cattle, victimised by stewards and mocked by opposition supporters who belittle our recent achievements. For once, none of this happened. I have never been treated so well at a football match, not even at home. If ever there was a club to emulate, Charlton Athletic would be it. 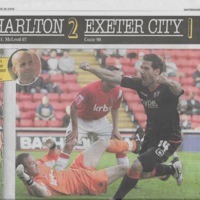 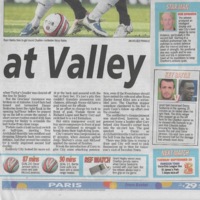 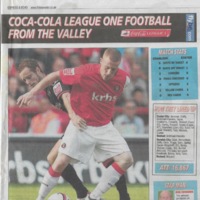 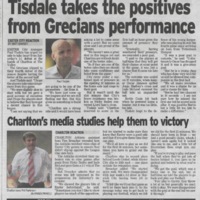 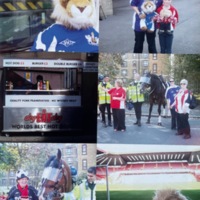 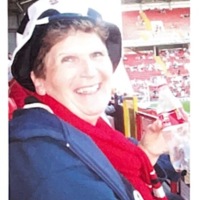 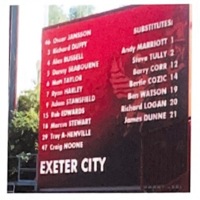