So on an ugly day City win an ugly match 3-1 amidst swirling winds and driving rain in front of a chilly 4706 supporters. City lined up: Jannson, Seaborne, Taylor, Edwards, Duffy; Noone, Russell, Harley, Dunne; Stewart, Fleetwood.

The opening exchanges were an even - and uninspiring - affair as both teams struggeld to cope with a wind blowing in different directions depending where you were on the pitch. It was, however, City who had the first effort on goal when Noone showed customary trickery down the left ending up with a hanging cross to Taylor on the far post whose looping header was scooped off the line through a combination of both keeper and defender.

Midway through the half the opening goal was handed on a plate, gift wrapped and with a shiny bow on top, to Hartlepool. Matt Taylor and striker Denis Behan were tussling furiously to control a long punt upfield when Jannson in the City goal had a complete rush of blood to the head and came storming out of his area at the exact moment Taylor headed the ball back to him. Natch Jannson missed it completely being hopelessly out of position giving Behan the easiest task in the world of strolling towards the goal and rolling the ball home to make it 1-0 to the visitors.

City almost replied immediately when Seaborne played the ball in from the left to Harley who in turn dinked the ball to the lurking Stewart who glanced a good looking header straight at the keeper. Then, amidst a particularly uninspiring passage of play, City found themselves level through one of the few bright spots of the half. Dunne played the ball into Stewart 15 yards out who turned sharply and rifled the ball against the upright with the keeper nowhere. The rebound was kind though, and Harley was on hand to gleefully slam home to end the half with honours even.

The second half began in much the same turgid fashion as the first half had been played out, and this was kind of emphasised by Dunne's half hearted chip straight at that keeper when he'd done well to charge down an attempted defensive clearance. But then again came a moment of magic to brighten the afternoon. Taylor's huge punt caught the Hartlepool defence completely unawares as Fleetwood found himself in acres of space deep inside their half, looking miles offside. With a defender frantically trying to get back as the linesman's flag stayed firmly by his side, Fleetwood twisted and turned until he found himself a good enough position from which to prod the ball past the keeper from close in to make it 2-1 to City.

Fleetwood celebrates his first goal of the season

Funnily enough this seemed to wake both sides up and all of a sudden we had a game on our hands and for the remaining half hour both sides fought hard to score the next goal. Hartlepool came closest first when midway through the half Jannson scrambled across his goal to palm away a well struck low free kick towards the base of the post. With a Pool player collecting the loose ball, Jannson somehow got back across his area as the cross came over and was fired goalwards, turning it round the post for a corner that ended up being headed onto the bar before eventually being cleared! Phew!

With ten minutes remaining Jannson again came to the rescue and importantly showed that his earlier howler hadn't affected him - bravely charging out to block a Hartlepool one on one with his legs. With the ball cleared Tis made a rare triple substitution introducing Archibald-Henville, Stansfield and Corr for Edwards, Noone and Fleetwood to see the game out. They did this in some style, with Troy adding some much needed pace at the back, and Corr and Stans giving a tiring defence something to think about in the closing stages.

Jansson made up his mistake with for some superb stops

But what they weren't thinking about was James Dunne receiving a neat lay off from Harley not far into their half. Dunne looked up, watched the ball sit up nicely, and from something near to 30 yards out smashed a swerving drive into the back of the net via the keeper's right hand post just as the fourth official was about to signal two minutes of stoppage time.

Even then City could have added a fourth on two occasions and both from Troy when first a flick on was blasted onto the bar then from the resulting half clearance his follow up was turned just over the bar in a frantic final few minutes.

And so we find ourselves with a return of four points from the last two games. A decent haul in anyone's books, especially after making such hard work of the game today and battling well against Swindon on Tuesday. But it hasn't been without its dramas - Jannson will want to forget his suicidal rush out of his area to gift them their goal, but from then on was impeccable. The two full backs, Seaborne and Duffy, both played their parts and although not as influential as on Tuesday Noone still looked very much the part on the left. Also looking the part is Harley, who no matter what the situation always seems to find the time and space to make his pass.

Next up it's our third home game in a week - against Swindon again, this time in the Johnstone's Paint Trophy before a return to league action with consecutive away games at Huddersfield and - Walsall before we're back at the Park for the visit of Wycombe towards the end of the month. Again there's no reason to think we can't return from our travels with a bunch of points as we've shown time and again we're nothing if not resilient and persistent. Today was by no means an advert for silky flowing football, but sometimes you just have to roll your sleeves up, get stuck in and graft yourself a win. So long as the points come though, who cares how you get them?

Maybe next time it'll be through silky football, but if ain't, so be it, I can't wait to find out. See you in a couple weeks.

For all advertising and sponsorship enquiries, please click here 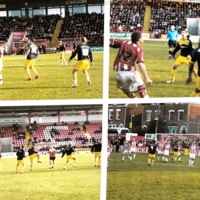 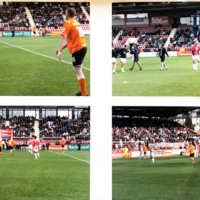 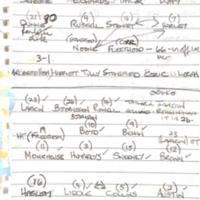