After playing junior football for his home town of Newton Stewart, McGuigan joined Hibernian as a 17-year-old, where he stayed for three seasons.

He was then transferred to Liverpool and helped them win the Football league Championship in 1901.
He was a forward who was at Anfield for just two seasons in the early 1900's. He made his debut on 6th October 1900 when Liverpool visited Derby County. He scored 5 times in the 13 first division games as a result he was selected enough to be eligible for a League championship medal, the club's first Division One title.
Liverpool slumped to 11th place a year later as they unsuccessfully defended their crown but McCuigan still contributed a goal every other game to give him final figures for Liverpool of 14 from 32 league matches. He also played in four FA cup ties for the club.

McGuigan was the first player to score five goals in a league game for Liverpool against Stoke on 4th January 1902 during a 7-0 home win over Stoke.

The following is an extract from the Lancashire. Evening Post February 13th 1906.
"Southport Central have had no more brainy player for many years than Andy McGuigan, who has done such good service for them in the forward line this season. There are about his tactics on the field those subtle touches of skill which mark him out as much above the commonplace.

In the revival which now seems to have come to the fortune of the Sandgrounders, McGuigan has had no small share.

The features of his play are his capital control of the ball, and accurate feeding; and, while he adapts himself admirably to the success of the forward line as a whole, he never hesitates when opportunity demands to exhibit a rare dash of individualism.

Like most of the Southport forwards, his shooting this season has been rather streaky, but several times he has furnished a good account of himself with fast, low drives. He has figured at centre, and in both inside positions.

His methods are characterised by sound judgment and artistic execution.

He quickly won honours, appearing in the Scottish trial matches, “C” team, in the season 1896-7; in the inter-county matches for the Southern Counties against Glasgow Association and Cumberland; and for Galloway against Dumfriesshire in 1897-8.

The following season he went to Edinburgh Hibernians, with whom he had a couple of campaigns as inside right.
His next migration was to Liverpool, in which club he was connected when they won the English League, 1900-1, for which he received a medal. He figured in the final for the Liverpool Cup when the Anfielders beat Everton, securing a medal in honour of the event.

After being with Liverpool for nearly three seasons, he was injured in an English Cup tie against Southampton in the February, and he never played again that season.

In December, 1902, he was transferred to Middlesbrough, who paid £300. Unfortunately, his knee gave way in the first League match, he engaged in for them, and the only further service he was able to render his new club that season was in a single friendly.

In an operation he had the cartilage cut out of his knee. It was not until January, 1904, that McGuigan played a few games for Middlesbrough.

The next season, 1904-5, he joined Brynn Central as the pivot of the forward line, and scored nearly 30 goals.

It will be gathered from this brief record of his career that McGuigan has enjoyed a capital record which would have been finer, those who know him are convinced, but for the unfortunate injury he received.
(Source: Lancashire Evening Post: February 13, 1906)"

He joined Exeter City in the summer of 1908.

A member of the Grecians first ever professional team, he made his debut in a 2-2 draw at Millwall in September 1908 and went on to become the club’s second top scorer that season with 16 Southern League goals.

He wasn’t as successful in his second season with Exeter though and and at the end of it, announced that he was retiring from playing.

"It was mentioned that Andy McGuigan an ex-Exeter player, had been appointed coach to a flourishing Club at Bilbao, in Spain."
(Exeter and Plymouth Gazette: March 1, 1913)

Following his playing career he returned to Liverpool as a scout and later became a club director, serving on the club's board when Liverpool won the championship two years in a row in 1922 and 1923. 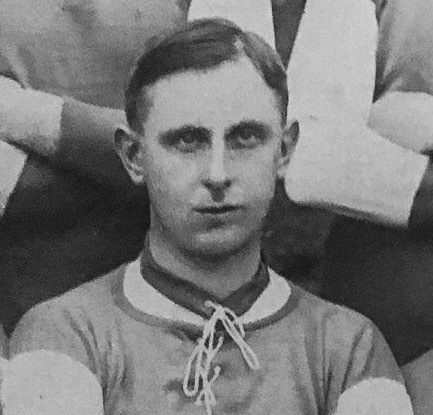 Andy was born on 24th February not 22nd as you say. Apart from this error I found this page on him very helpful as I am currently researching him as he is from my home town. Thank you

see the news improved picture, please contact us if you need further help.