After playing for local Northumbrian side, Cramlington, Lynn was signed on professional forms by Huddersfield Town in May 1947. But he was to only play five league matches for them in three seasons.

Lynn signed for Exeter City for a small fee in June 1950, the player turning down offers from other clubs to move to St James’ Park. He made his debut for the Grecians on the opening day of the season.

He lost his place in the team during the second half of the season and only featured in a handful of games after that. As a result he was released on a free transfer.

Lynn then joined Rochdale in July 1951 and was a big success at Spotland staying there until the end of the 1955-56 season, featuring in 193 league matches and scoring 23 goals.

Lynn completed his playing career back in the North East by signing for Blyth Spartans. 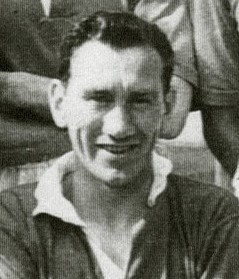