The on-loan Spurs midfielder found the net with a 30-yard lob after keeper Paul Jones made a hash of his clearance from a Richard Duffy backpass.

The Grecians had taken an early lead when Stefan Stam sliced the ball into his own net from Liam Sercombe's cross.

The hosts had plenty of chances to extend their lead and were made to pay by Mason's wonder goal.

"I'm disappointed that we only got a point and I have to fight to remember that we had a really excellent performance in the first half.

"In the second half we showed a little bit of naivety because there's certain elements to our game which are not nailed down yet.

"At this level you're going to be punished for mistakes you make and we're going to have be more tight with our disciplines."

"It seems like I'm repeating myself again. I'm really upset with the first-half performance. You try and tell people to do a job and they just don't do it.

"In the second half we had to change our shape and combat them.

"They played some really good football and we couldn't get near them. In the end the adjustments we had to make worked in our favour." 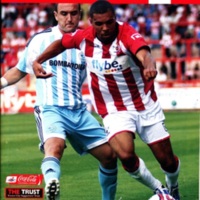 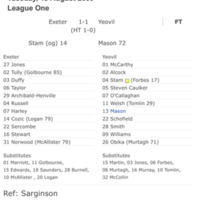