The ladies on my bus inadvertently walked into a domestic in the toilets of Lancaster services on route to Carlisle. An unidentified woman was heard to scream, at the end of a very loud conversation in which a cheque for £125 and the sale of a house was demanded, "I want a divorce" into her phone (we presume) whilst in a cubicle. For once everyone appeared to be in no hurry to exit the toilets! Back outside a few of the more athletic amongst us came to the aid of an ailing minibus that needed a push to get going. It was an 'interesting' sight!

Nearing Carlisle we saw a sign for Scotland. I did at this point wonder what on earth we were all doing! Most of us hadn't attempted the full round trip in a day, having stayed in Blackpool after our last visit in 2005. It was here where the much mentioned, but never explained, 'naked cyclist' incident occurred. Marge was out for an evening walk along the seafront with Hazel when much to her obvious surprise a man wearing no clothes whatsoever cycled past her. Quite why he was wearing no clothes whilst cycling remains unclear. Still, for Marge and Hazel at least it brought the season to a memorable close!

Shortly after finally arriving at Carlisle, problems of translation emerged at the turnstiles. A fan asked if inflatables were allowed. The conversation that followed, "Inflatable what?" "Balls" "Bulls?" "Balls" "Bulls?" "No BALLS, as in football" "Oh I thought you said bulls", was interesting. I wasn't even aware of there being such a thing as an inflatable bull but I think we should seek one out in time for our next visit! Inside we waited for Marge to arrive. When she did she wasn't best pleased. I'd forgotten that we were supposed to meet her outside the players entrance, having arranged this on the phone prior to arrival. I was let off on medical grounds - at Leeds I was elbowed in the back of the head by someone sat behind me during the match and although I felt fine at the time I was diagnosed with delayed concussion two days later. Since then I've suffered from headaches, speech and coordination problems, and most importantly in this case, short term memory loss. It's a lingering reminder of Leeds that I could do without!

The first half was terrible. Its high points were Troy who single-handedly kept us in the game, the pervading wafts of roast dinner emanating from the direction of the car park and the good behaviour of the Carlisle fans who chose not to pelt us with bottles unlike our last visit! At half-time the pitch was watered. As the spray lightly drifted towards us Marge stated that should she get wet she would sue! Merely seconds later the sprinkler changed direction and for our row only it started raining. I was cowering on the floor, my Mum had a jumper over her head, Marge ran away whilst fans favourite Maurice Wright, closest to the sprinkler, got a good soaking.

The second half continued much like the first with Troy and sub Saunders doing better than most. Carlisle were all over us and the end to which City were shooting, our end, was rarely visited. As time ticked on I suggested that if by some fluke we ended up winning it would be one of the biggest travesties of justice in football of all time. Then Marcus won a penalty. He duly fired it home and ran over to the ecstatic City fans and stood there shouting "250" repeatedly, clearly very happy to have reached 250 career goals. It is a remarkable achievement and I feel it was a great privilege to have witnessed it and to have been just a couple of metres away from the player celebrations. Miraculously we held on, aided notably by the ever-dependable Troy and the late introduction of super Roberto Edwards who cleared everything in his sight!

We set off home happy, if a little surprised by our smash and grab of the points. The 8 hour (yes, 8 hour) journey that followed was as long as it sounds. In total we spent 15 hours on a bus, leaving home at 5.30am and getting home at 1am, for 90 minutes of football. To witness Citys first win in League 1 this season and Marcus Stewarts 250th career goal it was more than worth it! 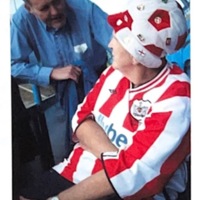 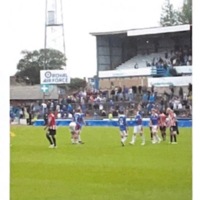 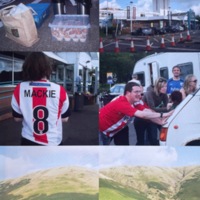 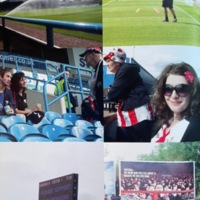