Leyton Orient is a nightmare to get to. After traversing a hefty wad of central London at speeds of approximately 5 mph we arrived at the ground. However, thanks to some 'fan friendly' parking restrictions we had to drive straight on past through some heavily congested roads to our designated car park, New Spitalfields Market. For reasons best known to Leyton Orient Football Club, buses are not allowed to drop supporters off closer to the ground. Take a look at the distance between the stadium and the market on a map. To quote a very popular (and not at all condescending!) insurance advert, “it's a long old poke". Cue a 20 minute walk back to the ground (in quite unexpected searing heat), followed in our case (and those unfortunate enough to be following us!) by an unnecessary 10 minute walk around the entire ground. I say unnecessary as on arrival we merely had to turn right then left and we would have been at the away 'side'. Instead we went straight on and had to walk around 3 sides of the ground!

The ground itself was a let down. Compared to the rather swanky looking home areas, the away area was firmly stuck in a timewarp. The seats were uncomfortable and the steps down to the concourse were dangerously steep. Still, we were positively bathed in sunshine with those in the front rows particularly liable to sunburn. City started the game marginally better than they had the previous week at Gillingham. They still however managed to fall behind to a 26th minute goal, an own goal which you could term Marcus Stewarts 251st career goal! I feared for City, and for the regular away supporters' sanity.

As the temperature rose higher and higher Marge, wearing her new black and white hat, provided an early contender for quote of the season with "I feel like a Turkey sat here". The half-time whistle saw a large-scale strategic retreat into areas of shade. Attention turned away from the football towards

heat reducing activities. There was a mass removal of unnecessary layers of clothing. inventive uses of wet paper towels and cold drinks were selling at a ridiculous rate. The difference said actions achieved was minimal with the temperature even hotter than our trip to a very hot Bournemouth last season.

The second half saw City begin to slowly improve. The ref was doing little to endear himself to City fans with his inconsistent display. Loan-signing Noone was pole-axed by a Leyton Orient sandwich. A free-kick was awarded but neither culprit were spoken to. Less than a minute later Duffy was booked for a lesser challenge and the ref spent an unnecessary amount of time talking to him. The relentless heat was getting to most of us, especially Maurice Wright who shouted out the inspirational "Come on we're one down up". Leyton Orient lacked a sporting sense of play. When we kicked the ball out for an injury to their player they refused to kick it back to Jansson and instead kicked it out for a throw in. The level of booing from the away side, amplified by the roof, was immense! As time ticked down and the temperature rose the crowd were crying out for Logie. All we got was Barry Corr. Still, with the impressive Noone on the pitch we knew we still had a chance. In the 78th minute this chance became a reality with a stunning Noone shot flying past the keeper and into the net. I didn't see his celebration. I was too busy trying to avoid acquiring another football related head injury! The rest of the game saw chances for both teams to win yet the score remained 1-1. The final whistle brought a sense of relief that City had improved from Gillingham and that in the signing of the simply outstanding Craig Noone, things were finally looking up for City.

We successfully made it back to the bus without undertaking unnecessary laps of the stadium. Thanks to the distance between the bus and the stadium we didn't leave until 5.20. The journey back to the motorway was ridiculously long. In it we took in sights such as Twickenham Rugby Stadium, Griffin Park, Wembley Stadium, Kew Gardens, and two horses galloping along the outside lane of the A406. You really do see it all watching City! 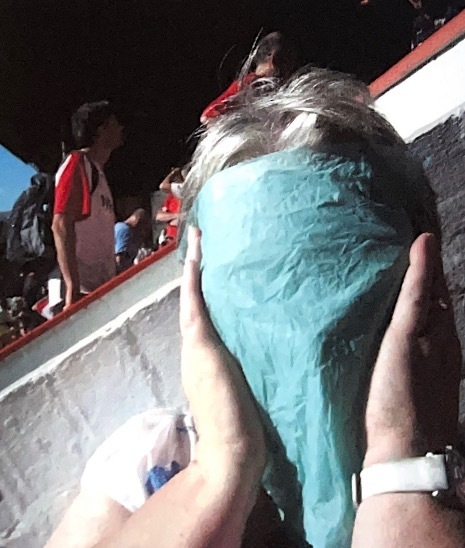