2nd round of the Johnstone’s Paint Trophy (JPT). Swindon win 4-3 on penalties.

Swindon made their way into the last 16 of the Johnstone's Paint Trophy with a shoot-out victory over Exeter.

The visitors went in front when Anthony McNamee's mishit cross drifted in the wind and eluded keeper Andy Marriott.

Swindon keeper Phil Smith maintained that lead with a stunning save from James Dunne, but Stuart Fleetwood's late chip sent the game to penalties.

Smith emerged the hero as he saved from Fleetwood and Neil Saunders, though, to earn the Robins a hard-fought win.

"I was a little bit frustrated that we hadn't seen the game out like we can do, but overall I think we fully deserved to be through the tie.

"With the two great saves Phil Smith made in the first half, and then the two penalties, he didn't deserve to be on the losing side.

"We've got good goalkeepers at the club and he's put pressure back on Dave Lucas who's got to be really on top of his game if he's going to continue in that shirt." 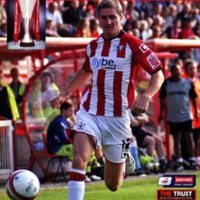 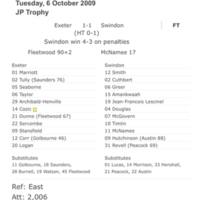