The time is 7.22pm and the bus is homeward bound from Huddersfield (shudder) having just pulled out of Keele services where men dressed as cavemen were urinating in the car park. Oh the glamour of the motorway. With a long journey ahead of me I thought it would be best to get on with this article but to tell you the truth I'm struggling. I've already received a number of texts along the lines of "I don't envy you having to write that up”.

To kick things off then, lets forget about the football and concentrate on the journey up. And what an 'interesting' journey it was. One of our drivers fancies himself as a bit of a stand up comedian and takes any opportunity to bellow into the microphone. A couple of hours into the journey he did just this, informing us that we would be stopping at Knutsford services. Sometime later we were surprised to see us go sailing past Knutsford. Cries of "I thought we were stopping" were met with a reply of “at the next one". When pressed about just why it was we had driven past Knutsford the driver informed us that "you must have been mistaken". He was adamant that we were wrong and the next services were Knutsford. To him they might have been, but to us they appeared to be Birch. Here I excelled myself with my random football knowledge by identifying a footballer waiting to be picked up as former Conference star Antony Elding. When his Crewe team-bus arrived we took great delight at waving at Billy Jones, who waved back when the team bus left, and then when it returned, reversing back into the car park to pick up two 'forgotten' players!

Newsflash! The time is now 7.43pm and the team bus has just overtaken us. Just one player waved. Newsflash! The time is now 7.48pm and miraculously we have now overtaken the team bus. More players waved this time although the cards table appeared to be playing with a level of focus that would fail to notice a nuclear attack let alone a supporters' bus.

Anyways, back to the 'story' (and how I wish today had been an act of fiction!). We arrived at Huddersfield in good time and were able to take a good look at the marvellous stadium which displays the finest stadium architecture I have ever seen. Each stand was semi-circular (instead of rectangular) with arched roofs. Unfortunately to get to the away end we had to climb 31 rather steep steps. At the top Marge exclaimed that she needed oxygen. Into the ground and annoyingly for Marge it was 44 steps back down to our seats at the bottom. When Marge arrived she screamed "did you see that?" She had spotted something rodent-like. Interrogation of the steward would reveal that it was not a rat as she feared but a squirrel. The squirrel was not his pet (Marge did rather strangely enquire!) and was one of many regular squirrel visitors who lived in the trees around the ground and got in for free via the unfilled corners of the ground!

My pre-match notes have now run out. I am a firm believer in the saying that "If you can't say anything positive then don't say anything at all". Therefore I won't be saying anything about the team performance. I thought (and hoped) that we had reached rock bottom at Gillingham. It would appear not. Even the tannoy announcer referred to our team as "berks" at half-time. Half-time itself was quite entertaining. Cheerleaders danced to "Let's get loud" an ironic song choice given that the tannoy was so loud you could probably hear it in Halifax. Their half time game of ‘On me shed son' (the chip the ball into a garden shed game) was won by a Grecian. And to top it all off it appeared that Bungle from Rainbow had found a new job as Huddersfields mascot and was walking around the pitch. 4-0 down very early into the second half and a very long way from home it was impossible to remain any sense of optimism. There were no 'imaginary goals' to celebrate ala Gillingham. Chants of "We're gunna win 5-4" died out before they got going. The final whistle was a welcome relief. The time now? 8.14pm. It's a long way home when you lose. It's even longer when you lose 4-0 and never looked like scoring. Still, onwards and upwards. 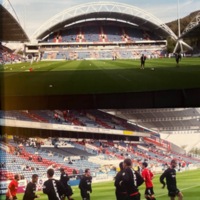 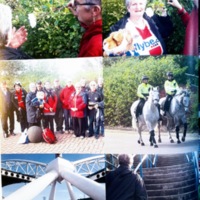 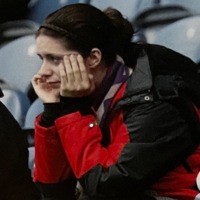