It never rains but it pours. The Saturday following our 4-0 drubbing at Huddersfield it was time to head to Walsall where much to the horror of the 744 Grecians present, we ended up on the very wrong end of a 3-0 scoreline. I had been looking forward to our trip to the Bescot. It's right next to the M6 and we've driven past it countless times on route to the northern outposts of the football league and conference. Making a pleasant change from the normal away day, we left at 9.30 and arrived a relatively short 4 hours later. Shortly after arrival Marge gatecrashed a photo. Walking past a group of 10 men posed for a photo she jokingly shouted out "You've forgotten me". To her surprise she was quickly bundled into the photo and I got my camera out quicker than you could say "I'm exposing my Flybe" (Marge, Bradford 2008)! She knew none of the men but they didn't seem to mind....

After parting with £20 and moaning profusely about their inability to have a student rate we were finally inside the ground we'd seen from the motorway so many times. However, after visiting the magnificent Galpharm the week before, the Bescot was a bit of a comedown. As the teams warmed up we were deafened by the tannoy. The announcer referred to the journey up from Devon as "hideously long", either attempting irony or lacking knowledge about the geography of League 1. He then tried to build a bit of dramatic tension when announcing the Villa - Chelsea score by having a pause of what was probably only 10 seconds (but felt more like 10 minutes) between "Aston Villa 2" and "Chelsea 1". An eclectic mix of music was being played - chart 'hits', motivational songs and for reasons best known to Walsall, the theme tune to the Pirates of the Caribbean! It would appear that the clubs of League 1 are trying to outdo themselves with the randomness of pre-match music. At Huddersfield we were treated to Sergei Prokofievs 'Dance of the Knights', more commonly known as the theme tune to The Apprentice!

For the first 25 minutes of the game City were brilliant, with more positives discernible in this period than the entire game against Huddersfield. Chance after chance were created, trouble was none of them ended up in the net. Walsall didn't make the same mistake. With just under half an hour on the clock we were 1-0 down. Walsalls very own Tim Sills Darren Byfield decided against joining in the team celebration and instead turned to the away fans. He spent most of the game either fouling players without punishment, rolling around on the floor, or gesturing at the away fans with his back to the referee.

Much like the week before, I felt that if we reached half-time 1-0 down we would still have a chance. Shame then that 2 minutes into extra time amidst cries of "close him down" Steve Jones was given space to shoot and score. We started the second half brightly and with the arrival of fans favourite Steve Tully onto the pitch there was a glimmer of hope that perhaps we'd get back into the game. Unfortunately Richard Duffy put paid to this, being sent off for a stupid second bookable offence near the halfway line. He knew as well as we did what the ref was about to do and started the walk of shame back to the dressing room as soon as he got up. Just minutes later Troy Deeney had us all fearing that our current away defeat record was at risk of being surpassed, scoring Walsalls third goal in the 70th minute. The Walsall fans, "all" 3289 of them, suddenly piped up. Cue chants of "you only sing when you're winning" and a quality shout from Marge of "oh shut your mouth"!

To their credit City kept trying and we kept encouraging them. After seeing 7 goals scored against us in the space of a week we were seeking a consolation goal. As the final scoreline would suggest this evaded us, although a Steve Tully shot came agonisingly close. Back on the bus we were informed that we weren't allowed to leave by the (very quick) way we had arrived as the people of Walsall were apparently waiting outside Morrisons intent on waving us off with bricks. One of the City minibuses tried to sneak out without permission and soon got stopped by a swarm of stewards. We too had stewards running at our bus as we nearly crushed a car on our way out of the car park. Given our drivers ability to get lost it was worrying to see our bus leading the 3 bus convoy. Miraculously however we made it back to the motorway. The short journey home felt longer than the trip home from Carlisle. Despite this, we were back in Exeter by 9pm. 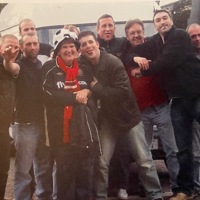 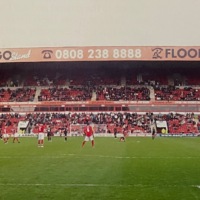 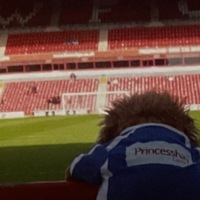