After a relatively uneventful (but long) trip up from Devon to Colchester (in which we saw a brilliant example of how not to park your car), nearing 1pm we were pleased to see our destination, the Weston Homes Community Stadium in our sights. However, with no junction from which to exit the A12 we had to carry on a good 10 minutes onwards (getting perilously close to Ipswich!) before we were able to join the other side of the carriageway and repeat the 10 minute scenic tour in the direction from which we came. We then saw the sights and many roundabouts of Colchesters equivalent of Marsh Barton before we finally arrived at the ground which we had passed a good 30 minutes earlier.

On arrival the sky was so dark you'd be forgiven for thinking it was an evening kick-off. With it raining heavily we sheltered on the bus temporarily before setting off to the away end. It was only once we had walked half way round the ground were we told that we needed to buy our tickets from the ticket office before we reached the turnstiles. Where was the ticket office? On the other side of the ground of course! When we finally reached the turnstiles, having by now walked around the entire ground, we were confronted with a self-service scanner which opened the gate once you'd scanned and retrieved your ticket. That is unless you were Marge who pushed her ticket in so hard that it got stuck. She had to be let in manually.

Inside we made a quick strategic retreat to the very top of the stand where just a few rows had been spared a drenching. However, thanks to the open sides of the ground we still got wet and the wind howled through. At times the roof above us was swaying! The warm-up was interesting. The pitch was just a little bit wet. There were numerous parts of the pitch where the ball wasn't bouncing or moving. One poor groundsman was fighting a losing battle with his pitch roller.

At 2.45pm the officials (incidentally including the ref from Rotherham who was supposed to have retired that day!) performed a final pitch inspection. Looking on we feared the worst, but thankfully the pitch passed. Up until our visit Colchester had the enviable home record of 6 wins in 7 home league fixtures. It was amazing then to see City nearly take the lead with less than 40 seconds on the clock. A further chance came in the 3rd minute before the league table was well and truly turned on its head as City took the lead through a Fleetwood goal. The away end roared. The electronic score board to our left lit up announcing that the away goal was sponsored by the Colchester Barber Shop, where apparently you can get haircuts for £8. Colchester are clearly a club making the very most of money making opportunities - even the goal-kicks were sponsored!

As the first half continued the Colchester swimming pool, sorry pitch, was providing much entertainment. Passes made with the best intentions were just getting stuck in puddles whilst challenges saw the challengers go sliding off into the distance with one player nearly ending up in the dugouts. With just over 40 minutes on the clock Marge asked me how long was left till half time. When I replied "about 5 minutes" she prophetically responded, "oh no it's bogey time". Seconds later, Colchester equalised with a goal sponsored by the Colchester Barber Shop. We didn't really have time to reflect upon the equaliser as just minutes later Fleets won a free-kick. Ryan Harley stepped up and fired home one of the greatest free kicks I've ever seen. We were back in front! Half-time saw the highlights make as little reference to us being the better of the two teams as possible, although Ryans free-kick was referred to as "a belter". The tannoy was up there with Nuneatons in terms of efficacy, although given the all too apparent wealth of Colchester as a football club I doubt they had borrowed theirs from Morrisons!

Throughout the second half City continued to play much better than Colchester. The wind continued to howl and at one point a large 'boom' was heard above us as the roof flexed under pressure! We fully deserved the 3 points. Thanks to a late equaliser we had to make do with just the one. Although disappointed not to have won I would have taken a point before kick-off. It was an incredible team performance, by far the best this season, and we now join Leeds United as the only teams to have come away from Colchester with points this season. Onwards and upwards... 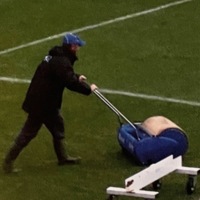 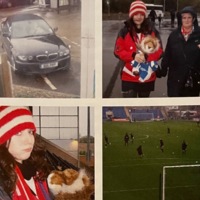