I still don't know how we threw it away.


After our victory against Nuneaton in the first round of the F.A. Cup we had all been hoping for a good second round tie. Unfortunately we got MK Dons. So, on the last Saturday of November we made the relatively long trek up to Milton Keynes. We arrived at Stadium MK - a huge black ostentatious monstrosity of a stadium plonked in the middle of a retail park - at just gone 1pm which gave us plenty of time to explore the desolate, soulless surroundings. The cleverer amongst us headed away from the ground towards the bright lights of Ikea and Asda. The sillier, i.e. me, Mum, Dad and Marge, stayed and took a walk around the stadium. An MK Dons fan asked me if I was impressed. I responded "no". He didn't like that. I think he thought that having marble exterior walls, some extravagant foliage and the Milton Keynes Hilton hotel attached to the stadium would detract away from the deeply disturbing 'history' of MK Dons as a 'football club'.

It was pleasing, and somewhat cathartic for those like me, troubled morally by their very presence at Stadium MK, to have partaken in rousing renditions of "We own our football club", "You stole your football club" and "AFC Wimbledon" before the match had even started. As the teams came out on the pitch you'd be forgiven for thinking that MK Dons were playing themselves with the tannoy announcement stating "Welcome onto the pitch MK Dons". There was no mention of us. It was left up to the Exeter fans to provide the vocal accompaniment to the game. We carried on with the same sort of chants that preceded the game, with the likes of "where were you 10 years ago?" attracting nothing in response. Unfortunately they all piped up in the 35th minute when they scored.

Half-time was spent at the back of the stand on the concourse, trying to escape the cold. Stadium MK was the football stadium equivalent of one of JK Rowlings Dementors (wraith like soul-sucking creatures who feed off human happiness for those of you not into Harry Potter!) sucking hope and optimism from you. We were pretty much resigned to defeat.

Optimism started to reacquaint itself with the away end early on in the second half in the form of a Barry Corr (or Bertie Cozic as the tannoy would have you believe) header. With his second 4 minutes later came a sense of great hope. Outright delirium accompanied Adam Stansfields goal some 13 minutes later. City had turned it round. We were 3-1 up with just over 20 minutes to go. Surely we were full steam for the hallowed 3rd Round? A man behind me attempted to placate his excitable friends as the game restarted by saying "there's many twists and turns left in this game yet". Unfortunately he proved somewhat prophetic. No sooner had I decided which team I wanted in the third round (for the record it was Liverpool at home), MK Dons had pulled one back. I knew in that moment that against the might of the opposition we were doomed. Sure enough, their third followed some 5 minutes later. From being 2 goals clear, we were now 3-3. The game settled slightly and City fought back. A draw looked tantalising possible.

Then with less than 5 minutes left to play, up popped Jermaine Easter. As the ball approached his head I despondently said "that's going to go in", and sure enough it did. City kept fighting but MK Dons were resilient. The final whistle saw our F.A. Cup exploits come to a disappointing end for another season. To add insult to injury the tannoy announcer felt it best not to wish everyone a safe journey home, instead repeatedly announcing that they were number 54 and that we should look out for them in the draw the next day. I think you can probably imagine the sort of replies that were fired off from the depressed away end in response.

The bus was understandably quiet for some time on the way home. Through a mix of chocolate, cake (with one person needing 3 pieces to pull himself out of the post match tunnel of despair!), and in my case a burger (my morale was that low!) the bus livened up. Normal service resumed with decidedly humorous discussions of how to pronounce Ikea products and one mans espousal of great love for Barry Corr notable highlights. It had been a day of elation and disappointment where City gave the 2nd round a real good go, but it wasn't to be. There's always next year! 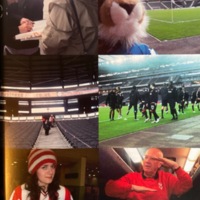 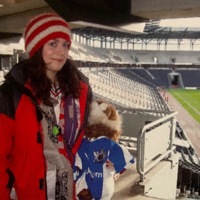