Boxing Day 2009 saw us make the relatively short trip to St Marys to play Southampton. It definitely made a change from the more recent Boxing day visits to the likes of Hereford, Weymouth, Torquay and Wycombe, Parallels to be drawn between City and Southampton were numerous with both sponsored by Flybe, both playing in red and white stripes, both having experienced off field struggles in recent times and both moving up (in Citys case) and down (in Southamptons case) the football pyramid. With regards to the last point, cast your mind back to Boxing Day 2004 - we were annihilating Hereford (beating them 4-0) in the Conference whilst Southampton were hosting Charlton in the Premiership.

There was a little more interest in a trip to Southampton than there was to Oldham, and as a consequence finding the right bus at the Park and Ride proved more confusing than a Roger East refereeing display. The journey was pleasant, well as pleasant as it could be when you felt as though you were going around a roundabout approximately every five minutes. Temporary respite came as we travelled past Charborough Park and its 3 mile wall punctuated by the spectacular 'Stag Gate' and 'Lion Lodge'. We stopped at Avon Heath Country Park which would have been nice had it actually been open. Resultantly we were left with just the one very unpleasant toilet.

After a series of obligatory missed turnings which saw St Marys loom ever further away on the horizon, we finally arrived. The driver confused the car park attendant with asking on arrival, "this is Brighton isn't it?" For a split second I think the poor man thought he was being serious! Grecian the Lion caused a commotion at the turnstiles. Checking the bag in which he was located the steward said "awwww" before stopping her colleague and getting him to look in the bag. Cue a longer than necessary discussion of Grecian whilst the queue to enter the ground grew ever longer.! In all the fuss she actually failed to check my bag.

Inside the marvellous stadium, good but not as good as the Galpharm, we were treated to a host of Christmas songs by the Salvation Army. Rather amazingly Father Christmas was the on-pitch announcer. The game kicked-off with the usual away end chant based banter. "You're just a small town in Portsmouth" went down like a lead balloon and the all too close home fans (we shared one end with them) excelled themselves at indecent gesturing! I immediately struggled with the kit similarities and kept thinking we were playing in red and white. With just 14 minutes on the clock Southampton took the lead. This I could take, the St Albans-esque downpour that followed I could not. Before kick-off we'd marvelled at our seats in the 3rd row. As the rain drenched us we marvelled no longer!

Just as I was pondering just how far City had come in recent years to be playing at St Mary's, Southampton scored their second. Apart from their goal celebrations and sporadic rousing outbursts of "Come on you reds" (to which the away fans joined in) there was little noise from the home fans. "More noise at Torquay" boomed out of the away 'area'. The ref was proving 'interesting'. Nearing half time the Southampton goalkeeper was awarded a free kick for a challenge, seemingly by gravity, as even from our position at the other end of the stadium we could clearly see that there was no one around him. As I was noting down this very incident in my notebook Troy fouled Morgan Schneiderlin (whose shirt you could win pre-match by waving manically at a camera), gave him a bit of a shove and was duly despatched back to the dressing room. Matt Taylors goal in the 68th minute gave us real hope of a comeback. Indeed, this looked highly likely up until Senegalese striker Papa Waigo (on loan from Fiorentina no less!) scored Southamptons third and final goal in the 88th minute. City had tried but with just 10 men on the pitch matching the wealth and playing might of Southampton was just too difficult.

We got away from Southampton quite quickly and were all set for a speedy return to Exeter. That was until we looked out of the window to find ourselves heading back towards Southampton. Our unexpected detour added 30 minutes to our journey home. The driver was adamant that he had been told to go that way. The jury is still out on that one.....! 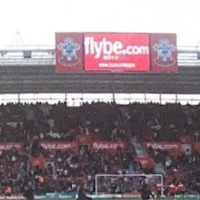 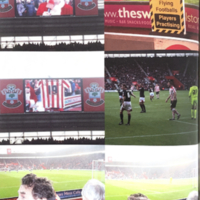