When we pulled out of Stadium MK following our F. A. Cup defeat earlier in the season I swore I would never, ever return. True to my word I didn't make the trip for our league match last week. I really, really don't like MK Dons and I have real problems with how that football club/franchise came into being. I deliberated not going to the F.A. Cup game but decided to go seeing as, being an F.A. Cup game, City would receive some of the money. Not wishing the line the pockets of a football club/franchise borne out of the theft of another football team, I went to London for the weekend of the league fixture. Incidentally, I passed through Wimbledon on route.

It took just 8 minutes of the game to pass before I started harassing my brother for updates. He told me it was o-o. At half time I rang my Dad. Prior to the game I'd told him that I would be ringing him for his update to include in this match report. Needless to say, his phone was off. As time ticked on in the second half, with no update on my phone from my brother I was under the impression that City were still drawing. Waiting in a queue I happened to check BBC Sport on my phone. To my horror we were losing and had been doing so for some time. I was gutted. For the majority of the rest of the second half I was underground and totally cut off from the match. Back above ground with the time 4.45pm the phone came out and I started frantically pressing refresh on the match page. Then all of a sudden the screen changed. City had scored! There was an ever so slight celebration from me and a shout of "We've scored" that was met with confusing looks by the people around me. After what felt like forever my phone started ringing. It was all over. City had got the point!

Later I started ringing round for some match reports. My first was Marge who began by informing me that she was "wrapped up like a parcel" as it had been cold, but not as cold as our last visit. She told me that City had deserved the point. She informed me that MK Dons had played in the manner with which most who play them have become accustomed to, dubiously, with Marge saying that "they were going down like flies". She said other things about the way they played too but I'm afraid they cannot be printed here. Harsh (and again unrepeatable) words too for the ref who Marge deemed worse than Roger East. The most important question however was not about the game but about Bertie. He failed to make the squad but thankfully him and Marge had shared a moment prior to the game. Next on the list to phone was my Dad. His phone was STILL off so it was straight onto my third reporter, my brother. Much like Marge he said that City had played well and that the referee had been disappointing. He told me he booked 11 players (actually 9!) but "bottled" sending an MK Dons player off. He also informed me that Joe Burnell, that mysterious person who has been listed as a player all season, actually played. I was starting to think he didn't actually exist..... When I finally got hold of my Dad later on in the evening, he echoed the points of Marge and my brother particularly with regards to the referee. This was significant. My Dad is normally quite defensive of referees having been one in the past. For this ref such luxury was not forthcoming and I was shocked by his official, and unrepeatable, verdict! He also told me that MK Dons had been as unwelcoming as last time. Still, we had the last laugh by getting a point, which by all accounts, was very thoroughly deserved. 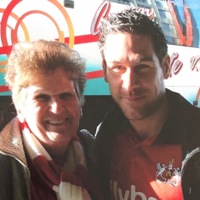 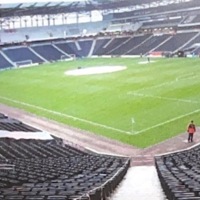