Exeter fought back in the second half to earn a draw with Southampton.

The visitors had dominated the opening period, with Rickie Lambert's shot brilliantly blocked by Rob Edwards.

Saints took the lead when Richard Duffy failed to deal with a free-kick at the back post and Adam Lallana took full advantage to fire into the far corner.

The Grecians equalised with their first effort at goal as Matt Taylor headed in a corner, while substitute Bertie Cozic hit a post in stoppage time.

"It was a game dictated by a very soft pitch, between two competitive sides. It was a fair result.

"I was very pleased with the first-half although we were 1-0 down.

"I think we deserved the draw and I think between the equaliser and the final whistle, we probably had the flow of the game and the impetus."

"The pitch and conditions were really tough. You'd like to think we could have shown a bit more quality on it but I couldn't fault the players' endeavour and commitment.

"We've got good players here and I expected a little bit better than I got in terms of quality." 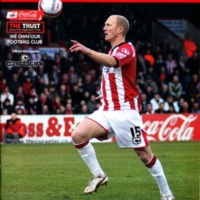 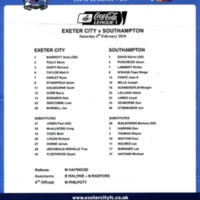 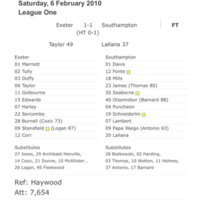