"There's Oliver Cromwell". Not the opening for my Millwall match report I had ever expected but there you go, as ever with supporting City expect the unexpected! Our bus had been crawling through central London for over an hour and we had finally reached the dizzy heights of Parliament square. It was here that we indeed saw Oliver Cromwell, Winston Churchill and Nelson Mandela (well, statues of them) and inadvertently joined a protest for Gaza. Crossing the Thames, with the temperature of the bus likened by Julian to that of Barbados, we put in a request to turn the heating down. The response from the drivers filtered slowly back to us but it appeared lost in translation when a woman told us to "open the emergency skylarks". They stayed shut and we continued melting.

After sampling the splendour of Kensington and Chelsea the other side of the river proved disappointing. It was a case of, quoting a passenger who will remain nameless, "affluent to effluent". Before we knew it we had arrived at our destination. Our bus stopped outside the social club to check where to park. Hordes of Millwall fans piled out of the club and stood staring at us. Seeking to escape their intimidating glares I turned to look out my window. Not much more luck on that side. Here a load of kids were gesturing at us! Not before time the bus moved onto its parking place, a fenced compound lined with stewards. Once all the away buses were in the gates were locked! And to think, a few years ago we were parking on a playing field at Farsley Celtic......

A series of gates and lines of stewards, police and police horses prevented the home fans from straying into our paths but that did not stop an unusually large number of fans seeking to enter the away end as soon as the gates opened. Once inside it was up flights of stairs to reach the upper terrace. Having three learnt from my mistake at Brentford last season I sat not in the vertigo inducing front row but a few rows back. After what felt like a very cold eternity (the gates had opened at 1.30pm) the teams came out onto the pitch. Merely minutes into the game Andy Marriott (who received a barrage of wolf whistles everytime he was in possession of the ball thanks to his brilliant florescent pink kit) had pulled off a superb double save. Apart from their wolf whistling the Millwall fans were quiet. When Marcus Stewart was receiving treatment for an injury the away end goaded the home fans (possibly not the best strategy given their reputation!) with chants of "you're not scary anymore" and "more scared at Torquay, we were more scared at Torquay".

As the game progressed although we were struggling to create any decent chances with Marriott at the helm Millwall appeared destined not to score. The arrival of Fleetwood onto the pitch in the second half brought great hope and during a spirited spell we came incredibly close to taking the lead. Unfortunately it was Millwall and not us that took the lead. They were awarded a free-kick which looked dubious to the City fans who by this point in the game had little faith left in the referee who had been inconsistent at best. It says a lot when both fans deploy the "you don't know what you' re doing" chant. Waiting for the ref to sort out the wall, which took some time, I had a sinking feeling. I just knew where it was going to end up. Sure enough it flew into the back of the net and The Den roared.

The game continued to go downhill when with mere minutes left Barry Corr was sent off for a stupid challenge. To say I was livid was an understatement. Three red cards in less than one season is nothing short of despicable and not the sort of behaviour we want to see from someone wearing our beloved red and white. Moving swiftly on, we safely escaped Millwall with just a repeated death threat from a gesturing juvenile who followed our bus!

Given the epic level of performance given by one person in particular at Millwall there is only one way I can end this article and that is by dedicating it to Andy Marriott. What a performance. He is a man that fully deserves to wear the red and white, or in his case, florescent pink! 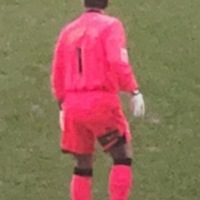 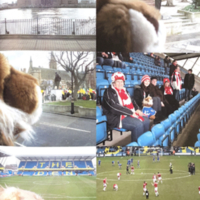