I'm writing this sat in some random service station on some random motorway on the way home from Brighton. I'm surrounded by Grecians, all of whom look utterly dejected. It's been a bad day. The signs weren't good on the way up. Marge, chief proponent of the A303 hate brigade had called for its reopening as she was sick of the windy alternative road we'd had to go on as a result (this view had a lot to do with her spilling her coffee down her shirt going round a corner!). The road had an innate nausea inducing characteristic which was only marginally made up by the picturesque nature of the route. When we weren't feeling sick discussion turned to what we wanted from the game. The majority decided they'd settle for a point. I went with 15. I even suggested that we ask the F.A. to install some special Tescos-esque double points scheme for all the points City win for the rest of the season... for

We got to Brighton very early. Unfortunately me and my Mum had seen the sights of the Withdean stadium in under 5 minutes. Think 'Exeter Arena' and you're on the right track (no pun intended)... In the hours that we had to fill before kick-off we were 'welcomed' by the home fans with "I hope you get wet" (there is no roof on the away end), I thought I saw Cliff Richard in the car park (it wasn't) and a home fan kicked off at an official because there was no carvery in the pub. If only that was all we had to worry about.... Once Marge arrived we went off in search of the club shop. We were informed that it was a "cabin" parked on the home end concourse but "it's only temporary". Arriving at the concourse we couldn't see it. A lady selling programmes told us, with more than a hint of exasperation, "it's behind the burger van. It's only temporary. Everything here is only temporary". I think the Brighton fans have some sort of inferiority complex. The sooner they move into their new ground, the better!

Once the turnstiles opened we were all frisked, some more thoroughly than others. I still feel slightly violated! The 'stadium' was underwhelming. To get to it we walked past a long jump pit. The away stand was a temporary stand with rows of seats that wobbled. It made Gillingham look positively decadent. We had to sit at the back as you couldn't see the pitch from the bottom rows. Wherever you sat the pitch was a long, long way away. Considering I'd paid £20 for a ticket it was nothing short of ridiculous. The only consolation was that the home ends were little better.

And so to the game. I'll keep this as brief as possible, mainly because I have spent the majority of the 3 hours since the final whistle consuming my sorrows and I have a chocolate overdose induced headache as a result. The first half saw City and the referee disappoint in equal measure. We left the pitch 1-0 down having played in a manner that seemed worse than the week previous. A spot of group counselling at half-time followed where we tried to convince each other that it would get better. It didn't. In the 49th minute we were 2-0 down. The next 'moment' came when Steve Perryman appeared to be despatched to the stands. I only found this out because the man next to me had a pair of binoculars! By this point I, like many others, was losing the will to live. When James Dunne became our third and final substitute Marge screamed out "WHERE'S MY BERTIE?" which raised a much needed laugh. Borderline hysteria followed with a shout of "I've been to comedy nights that weren't as funny as you" directed at the lino in honour. of (what felt like) his 200th successive mistake. As time ticked down numerous Grecians gave up and started to leave. One commented "I'm going to chuck myself off the top step". A Brighton substitute returning to the dressing rooms took it upon himself to make going down gestures at the away end. When we missed an open goal the cruel home fans chanted "that's why you're going down". With good humour we responded "we're going down with the Brighton". I sincerely hope it doesn't come to that. 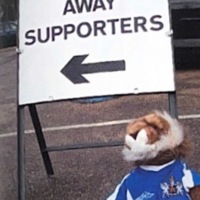 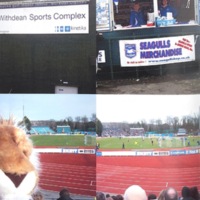 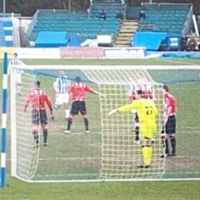