Walking out of Roots Hall following our 0-0 draw with Southend I was the most miserable I had been all season. The game had been more tortuous to watch than any of our numerous away defeats, not because we'd played badly but because we'd failed to score despite throwing near enough everything bar the kitchen sink at the goal. A couple of hours have now passed and I feel more upbeat. This has a lot to do with the detour that we have just experienced. A missed turning took us through Tottenham. Here Glen Cronins biggest fan took it upon himself (for reasons unknown) to, aided by some balloons, dress as a woman and attempt to provoke reaction from passers by. This worked as a white van man nearly crashed said van in the process of doing a double take, whilst much to his delight two ladies on the top deck of a double decker bus blew him a kiss.....

After a pretty boring journey up, with 'highlights' being the mending of my sunglasses and a visit to the newly opened Waitrose on the south bound side of Fleet services (I said it was boring!) we arrived at Roots Hall. The away end was basically a standing terrace with seats bolted on. With scenes reminiscent of Luton, picking a seat was difficult as not only did you need to find one that was above pitch level (a good 4 rows had you looking up at the pitch) but you also needed to avoid one of the pillars plonked at the front of the stand. We settled for a seat just to the left of the goal, which was to soon prove a bad choice. Shooting practice wasn't going well. Balls were careering into the away end at speed. Cue Marge... "I'll be out cold by the time the match starts". A brief period of respite followed in which we were introduced to what are, in my opinion, the greatest football mascots (apart from both Grecian the Lions of course): Sammy the Shrimp, and Elvis J. Eel (or deformed donkey to Marge), both of whom pranced around in front of the away end. Then Logie took a shot. In slow motion the ball came flying towards us. Marge ducked one way, I ducked the other. Luckily, the ball hit the seat between us. A relieved Marge jokingly responded "my heart... where's the paramedic?"

The first half was memorable for the noise coming from the away end. Song after song boomed out of the roofed end. So too did cries of 'SHOOT', not to be misconstrued with 'BOO', every time City (including at one point Paul Jones!) got the ball. The second half saw City quickly put the ball in the back of the net. It was an amazing moment and in the midst of one of my over-over-exuberant goal celebrations (exuberance levels have increased as City goal numbers have decreased!) I did the obligatory, and given our current predicament, apprehensive turn to the lino, and was absolutely gutted to see the flag aloft.

During a spell of Southend pressure an illegal player entered the field of play. A pigeon. It flew down into the goal mouth and wouldn't budge. We quickly became fond of the pigeon and didn't take too kindly to their goalie shooing it away. The away end booed. Luckily for us it was a plucky pigeon and it flew straight back down again amidst cheering. When play returned to our end it took flight, only to return again amidst cheering when Southend regained possession.

As time ticked down City really picked up the pace. With the pigeon relocated to a safer place, chance after chance rained down on the goal. It was agonising. I lost count of the times we were on our feet, mid celebration only to see the ball inch its way past the goal. Late on Fleets was closing down on goal when a Southend player tackled him, fell to the ground and regained the ball using his hand. It was clear for all to see yet inexplicably the referee and linesman missed it. I nearly blew a gasket. Despite all the will of the team and the supporters who were singing and cheering and desperately trying to suck the ball into the back of the net, the score remained 0-0. As the old adage goes, a points better than nothing but I can't help thinking that we could and should have taken all three..... 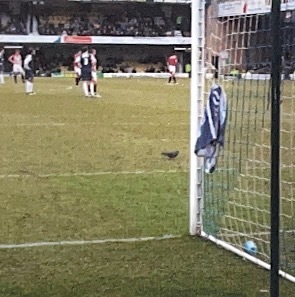