Waiting for the team bus to arrive at Wycombe we witnessed the arrival of the Wycombe squad. Strangely, the majority were wearing ill-fitting shiny suits. When one turned up in a plain black one my Mum asked him where his shiny suit was. He laughed and told us "that's for after the match". We were also subjected to a prolonged stint of booing and chants of "who are ya?" from a group of 5 year olds having a birthday party tour. "Back to school on Monday" was too good a chant opportunity to miss and it rang out across the car park. When the team bus finally arrived, after the driver had built up the tension by some protracted manoeuvering/faffing around the car park, the team were buoyantly cheered off. A Wycombe player who arrived mid way through got confused and turned and waved to us all. He seemed even more confused when we booed him.

for As the teams warmed up on the pitch the away fans blew up a ridiculous number of red balloons. Or in Marges case, got other people to blow them up her. Poor Marge accrued her optimum number of balloons (four) way too soon and was left holding said balloons for a good 40 minutes. As the teams came out the balloons were released and it was a magnificent sight. Sadly as soon as they landed a crack squad of killjoys came and burst them. Luckily an intelligent squadron of balloons positioned themselves at the far end of the stand and hid there for 17 minutes (I wasn't timing it, Wycombe had two clocks - one for the actual time and one for the match time!) before instigating operation pitch invasion. One even got into an executive box!

To be honest, and as you can probably tell, the balloons were the highlight of the first half. After spending half time queuing for one of two toilets, I optimistically took my seat for the second half. It didn't immediately go to plan. Within 6 minutes we were 2-0 down. My optimism was waning. Then I heard a man behind me remind his friend of how MK Dons had come back from 3-1 down to beat us 4-3 in the F.A. Cup (not the best example he could of used...) and I convinced myself that all was not lost. Just 5 minutes later this was confirmed. The brilliant Liam Sercombe struck a shot from 25 yards out. In slow motion it flew towards the goal. You could literally hear the sharp intake of breath from the away end as we willed it home. When it hit the back of the net optimism returned and the sense of belief, both on the pitch and in the stands was palpable. Cue Wycombe time wasting. So slow were the ball boys that Andy Marriott took to collecting balls along the touchline. The clocks, both of them, appeared to be ticking down at double speed. Then Logie got knocked over. He looked like he didn't know where he was. We had no subs left. The chanting his name. He valiantly got up and carried on. away end started

As the game entered the dying minutes people all around me had their heads in their hands. As I made that very note, Logie won the ball in a very favourable position. I threw my notebook on the floor, got to my feet and like everyone else, willed Logie to fire the ball home. Fire it home he did. Cue pandemonium in the stands, and on the pitch. Here, Cheggers moved towards Logie for an extreme close up/celebratory hug whilst a number of fans ran down to the barrier. Now, at Wycombe for some would say slightly odd reasons, the barrier between the pitch and the away end is inflatable. At the end of last seasons' game a few fans lent on it and it fell over. Well, after Logies goal it stood no chance and down it fell. Cheggers got consumed in the melee but majestically kept his camera held aloft. It was an inspired moment. The referee did not share the same sentiment. Unbelievably he booked Logie. Spoilsport. It wasn't Logies fault that either a) Cheggers wanted a close up/hug and/or b) the barrier was inflatable! City held out and we got a valuable point, one more than I'd thought we'd get when we went 2-0 down.

The journey home saw me learn a valuable lesson - never go to a football match when you wake up feeling ill. I was suffering from a nasty virus which really started to take hold after the final whistle. I felt like I was on another planet! My finest hour came when I asked if we had crossed the Avonmouth bridge. We were at Sedgemoor.

The Sunday after the game saw Cheggers become a nationally renowned photographer, with his 'role' in Logies booking heavily stressed. However, the official club website failed to include the yellow in the match statistics. I thought Cheggers had got away with it. However, Monday morning saw the Echo suggest otherwise. I'm still not entirely sure about it. Rumours the yellow card was reallocated to Cheggers continue to circulate! 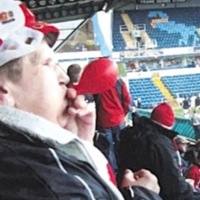 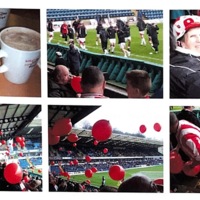